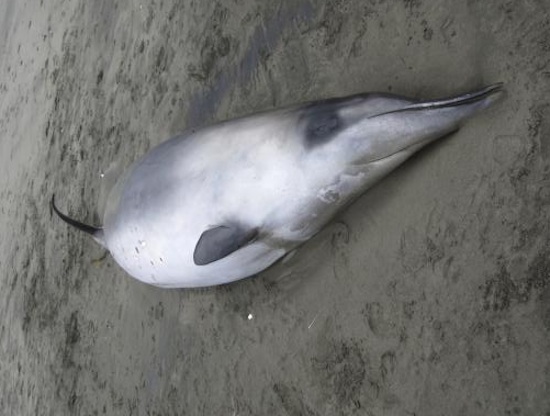 The spade-toothed beaked whale is one of the ocean’s most mysterious creatures. Known to science only because of a trio of partial skulls that have washed up on beaches in Chile and New Zealand, the creature is largely a mystery. Thanks to DNA testing, though, researchers know one more thing about the whales today: there are two fewer than there used to be after a mother and her calf washed ashore dead in New Zealand in 2010, marking the first time anyone had actually seen an intact specimen of the rare species.

When they were found in 2010, the mother whale and her calf were initially misidentified as a far more common related species, Gray’s beaked whales. That’s understandable, since no one had ever seen a spade-toothed beaked whale before this photo was taken. Thanks to a New Zealand program that tracks the creatures who wind up beached on the nation’s shores, DNA evidence later demonstrated that the beached whale and her calf were in fact the two first specimens of the spade-toothed beaked whale ever seen.

Researchers were so surprised by the finding that they ran the DNA tests several time on tissue samples from both whales, and only published when they were absolutely sure, resulting in a paper in the latest issue of the journal Current Biology.

While it may be hard to believe that a marine mammal this big — over 15 feet long — has gone all but unidentified by science, the very fact provides a reminder that the world’s oceans hold all sorts of things we have no idea about yet. The new images and measurements for the whales may not be a lot to go on, but they will give researchers a better point of reference for what these creatures look like and how they may live than they’ve ever had before, hopefully leading to a better understanding of these practically unknown animals.