SOPA Returns as Ransomware Virus, Highlights Just How Horrible the Bill Actually Was 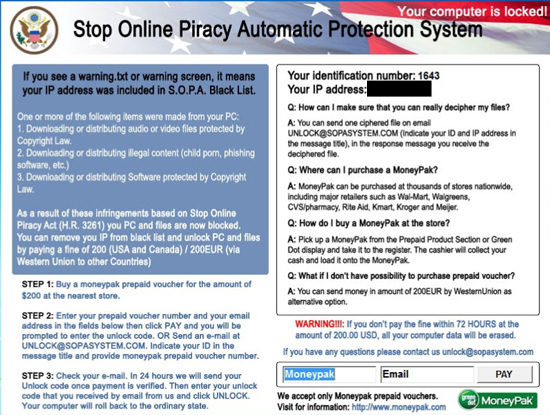 The Stop Online Piracy Act received a lot of attention when Congress was trying to push it through under the radar. Though the bill eventually floundered, the threat it represents is still there, lingering on the peripheries of the Internet. The fear is that some kind of Internet regulation in regards to copyright will almost inevitably be passed as lobbyists will continue to push such measures. A computer virus now exists that takes advantage of this dread by implying SOPA is in effect and infected users have been caught in an act of copyright infringement.

The virus essentially holds the computer for ransom, demanding that users pay up to access their data. If users don’t “pay the fine” of $200 within three days, the virus warns that all their data will be erased. At least this version of SOPA is being decidedly fair by offering a way out.

In reality, a quick search should easily provide any infected user with the ability to remove the ransomware. The warning does look frighteningly official, though. It even has the United States flag and a seal! That means it’s from the government. Nobody would ever maliciously use various bits of government-related imagery to signify that they were officially related or anything. Especially not a virus.

At least this version of SOPA is decidedly easy to remove. No Internet blackouts required!