Which Sites Are Going Black to Protest SOPA/PIPA?

If you found yourself wondering what the name of the second general of the Dutch Revolution was, or if that was even real, and you ventured on over to Wikipedia to look it up, you probably noticed that the site looked different today. Different, as in blacked out. And then you may or may not have panicked, because now how would you satisfy you thirst for random trivia that is probably somewhere else on the internet, but your go-to site has shut itself down, and now your brain must find something else to do for the next — hey, someone mentioned you on Twitter. You should check that out.

Anyway, you most likely heard about this earlier in the week, when the site’s administrators announced that in protest of the highly controversial internet censorship bills SOPA and PIPA, they would “censor” their own site for 24 hours. But Wikipedia is not the only site protesting today. After the jump, find out who else has shut themselves down, and see what the internet will look like should these bills become law.

The sites hit hardest by these bills — the intent of which is to end the piracy of copyrighted material and protect intellectual property and creative content, but goes far beyond just targeting people who torrent things illegally — are sites we come across on a daily basis as a site that focuses heavily on fandom. Tumblr, for example, and the steady stream of silly gif files, using images from TV shows and movies — copyrighted material. Under SOPA/PIPA, if someone was feeling frisky one day, they could decide that the person posting that copyrighted material was in violation of this law and shut their site down. Without any notification or due process. Today, Tumblr is giving people the option to show others what their account will look like under SOPA/PIPA — blocked. While the sites themselves are not protesting, users of Facebook and Twitter would also be at risk of penalty for sharing pictures, videos, or audio that someone deemed in violation of copyright law. (A completely benign video with copyrighted music playing in the background, for example, might be in violation.)

Another site famous for its fandom-inspired content is Reddit, a veritable hive of people posting copyrighted content and parodies of it, which has also blacked itself out in protest for 12 hours.

Basically, Reddit would not even be allowed to exist.

Ars Technica has not blacked out, but is devoting much of its coverage to the bills, providing vital information and updates.

Google, while still up and running, is actively protesting SOPA/PIPA and has posted a petition and an infographic illustrating the possible consequences of the law and its growing opposition. Here is what Google looks like today: 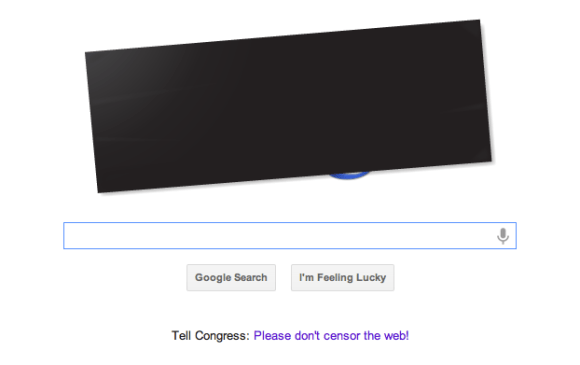 On a smaller scale, other web sites are taking a stand by blacking themselves out (like Boing Boing) and The Oatmeal, which features an excellent gif explaining exactly what harm the bills would do to sites just like it. The guy who runs The Oatmeal even mentions that his own creative content actually was pirated, but that SOPA/PIPA simply go way too far.

The creator of web comic xkcd, Randall Munroe, has also stepped up to express his apprehensiveness about the bills, saying that if not for our ability to share his content so freely, he would have never seen the success of his comic. He says he opposes SOPA/PIPA “as a copyright holder and small business owner.” Similarly, Dinosaur Comics and J. Jacques’ Questionable Content have also blocked themselves for the day.

Several other sites are participating in the protest, either blacking themselves out completely or providing information on where they stand. (Hint: the ones in favor of the bill are less vocal about it than the ones who protest it.) Mashable has been compiling a pretty comprehensive list of participants and continues to update it. SOPA Strike has even more specific information. And in case you were wondering about all the fan wikis, they have information on them, but are not blacked out, similar to TV Tropes.

And if you still don’t know what the deal is with the internet, then we urge you to follow Herpderpedia on Twitter, where one hero has taken on the task of exposing people wondering why the heck Wikipedia doesn’t work and what this has to do with soap. Don’t be one of those people. Be informed. (Thank you for bringing that to our attention, Geekosystem)

So, here is what’s happening with SOPA/PIPA. As we have told you, President Obama has issued his official opposition (from his top tech advisors, speaking on his behalf) to the bills, saying that “Any effort to combat online piracy must guard against the risk of online censorship of lawful activity and must not inhibit innovation by our dynamic businesses large and small.” He has also said that his administration will not support the bills in their current forms, which does not mean he will absolutely veto them if they pass in both houses. However, considering how poisonous this thing is, and also the fact that he is trying to get re-elected in less than a year, this is what I think (as a former political science major who has followed politics for a while) might happen: 1. Obama does not expect this to pass in the first place, so he doesn’t feel the need to make any promises. 2. He is giving the bill a chance to actually be about piracy and not dismantling the entire internet, in which case, he will sign the bills once they don’t resemble the bills they are in their current form at all, whatsoever. (Chances for that: slim.) Then there is always a pocket veto: The President takes no action if the bill makes it to his desk. If, after 10 days, he forgets about it (or chooses to forget about it), the bill becomes law without his signature. OR if Congress adjourns during that 10-day period and there is still no Presidential signature, the bill dies.

But also, keep in mind how Barack Obama spread the word during his campaign: on the internet. On a lot of sites that share a lot of pictures. Just a thought.

However, even all of this is not stopping the bills’ sponsors. While we reported that the House version of the bill, SOPA, had been “shelved indefinitely,” it looks like they have decided to pick it up sooner than anticipated — it will come back up for debate next month, after changes are made to the bill. (Changes that will still make for an incredibly overreaching piece of legislation, most likely.) And then, there’s PIPA, the Senate version of the bill. That will come up for a vote in less than a week — January 24. It’s not entirely clear that its passage is a sure thing, and some senators have called for Senate Majority Leader Harry Reid (D-NV) to delay the vote until changes can be made. Sponsors of both bills have also been reconsidering their stances — publicly — and taking their names off the bill.

Also, again, consider the following: this is a year in which there is a national election. The vast majority of House Representatives will be trying to win re-election this year, as well as several Senators. And this is a major, major piece of legislation with a lot of controversy attached to it, and a lot of publicity. The President doesn’t want to be responsible for that — will Congress?