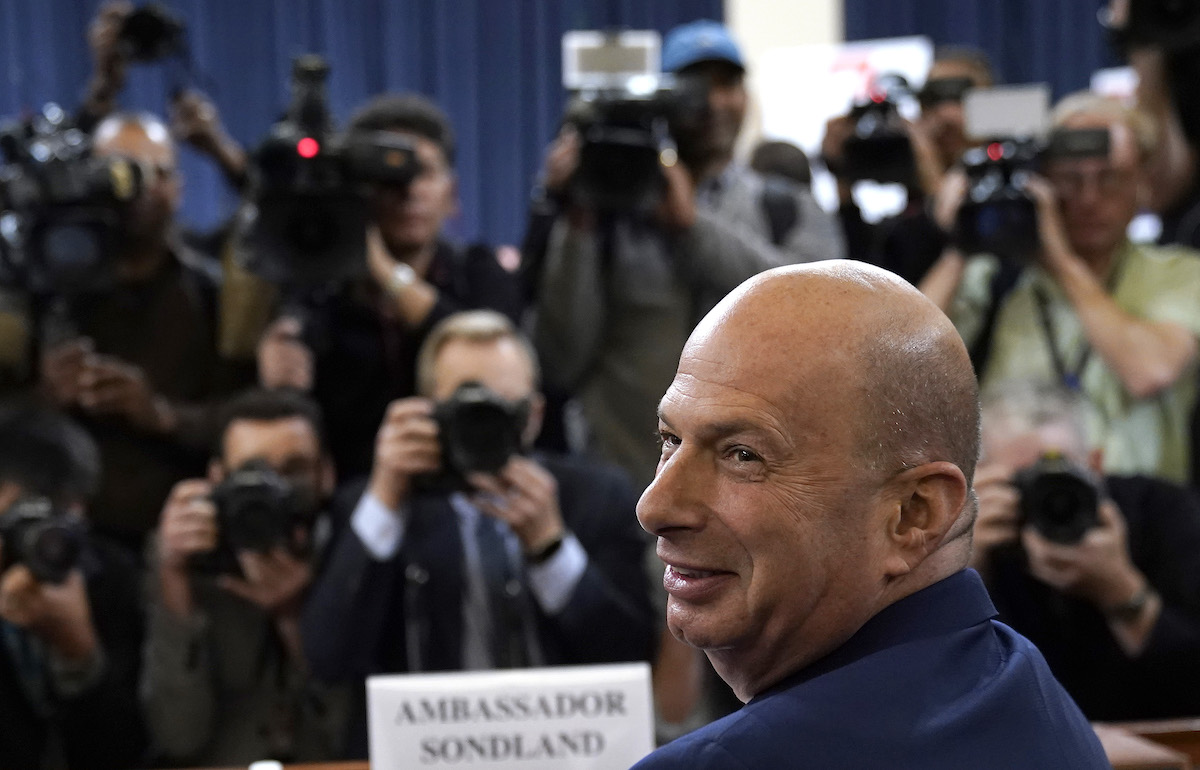 Gordon Sondland, the American Ambassador to the European Union, is at the center of today’s public impeachment hearings. And if earlier hearings have been (wrongly and unnecessarily) criticized for lacking “pizzazz,” well, Sondland showed up with pizzazz aplenty.

When Sondland first testified in the closed-door hearings, he said that he didn’t know about any stipulations attached to the aid the U.S. was scheduled to give to Ukraine–meaning, no quid pro quo as Trump keeps insisting.

Then just a few weeks later, after a number of other witnesses had contradicted him in their testimonies, he suddenly remembered that–oh yeah!–there was a quid pro quo. So he returned to Congress with four new pages of newly recovered memories, presumably because he realized that he was on his way to becoming just the latest Trump ally to go to prison for lying to Congress.

As he testified today, he not only made it explicitly clear that yes, there was a quid pro quo (otherwise known as bribery, extortion, etc.–take your pick), but he says everyone knew about it.

#Sondland: “Everyone was in the loop. It was no secret.” #ImpeachmentHearings

Sondland says Trump wanted a public statement from President Zelensky, announcing an investigation into Burisma (the Ukrainian energy company where Hunter Biden served as a board member), and that the aid money was dependent on that announcement.

That’s the exact thing Trump, Giuliani, and everyone else has been saying never happened, and now Sondland is saying everyone knew that was what was going on. From Giuliani to Mike Pence to Secretary of State Mike Pompeo, Sondland is throwing everyone under the bus. There aren’t enough buses for Sondland’s whole testimony to fit under.

Shows Pompeo in the loop with new evidence

Implicates Trump, testifies this was on his orders

Sondland: As late as Sept. 24 Pompeo was directing Volker to speak with Giuliani.

This would be AFTER the House had begun investigating and the whistle had been blown….#ImpeachmentHearing

In implicating literally everyone, Sondland is pulling an incredibly difficult technique known as the “reverse Spartacus.” Impressive. 10/10.

Unsurprisingly, Sondland paints himself in a very positive, innocent light. He says he didn’t really understand the implications of Trump’s demands and that the aid package could be part of that quid pro quo, which also involved a meeting between the two presidents that Zelensky was reportedly eager for. He says he didn’t even realize the Bidens were tied to Burisma. He says he was only concerned with doing “what was necessary to get the aid released, to break the log jam.”

Even now, he’s blaming the White House and the State Department for the gaps in his memory, since they have apparently refused to turn over some unclassified documents he’s requested.

There’s an early moment in Sondland’s testimony that might not make headlines, but it’s remarkable.

He says the White House is stonewalling and refusing to release his own records, over his own objections.https://t.co/yNnXXCvhTg pic.twitter.com/4qMzcIAucI

It’s not surprising that ignorance is Sondland’s only believable defense. He’s not an experienced diplomat. He owns a bunch of hotels and got this position after donating a million dollars to Trump’s 2016 campaign. Now he’s part of the “three amigos” who, along with Rudy Giuliani, are reportedly determining our entire foreign policy with Ukraine.

Way to drain that swamp! 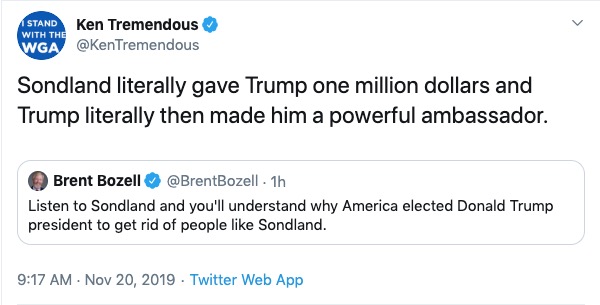