Well Will You Look at That, I Guess Gordon Sondland Decided He Isn’t Willing to Go to Prison for Donald Trump 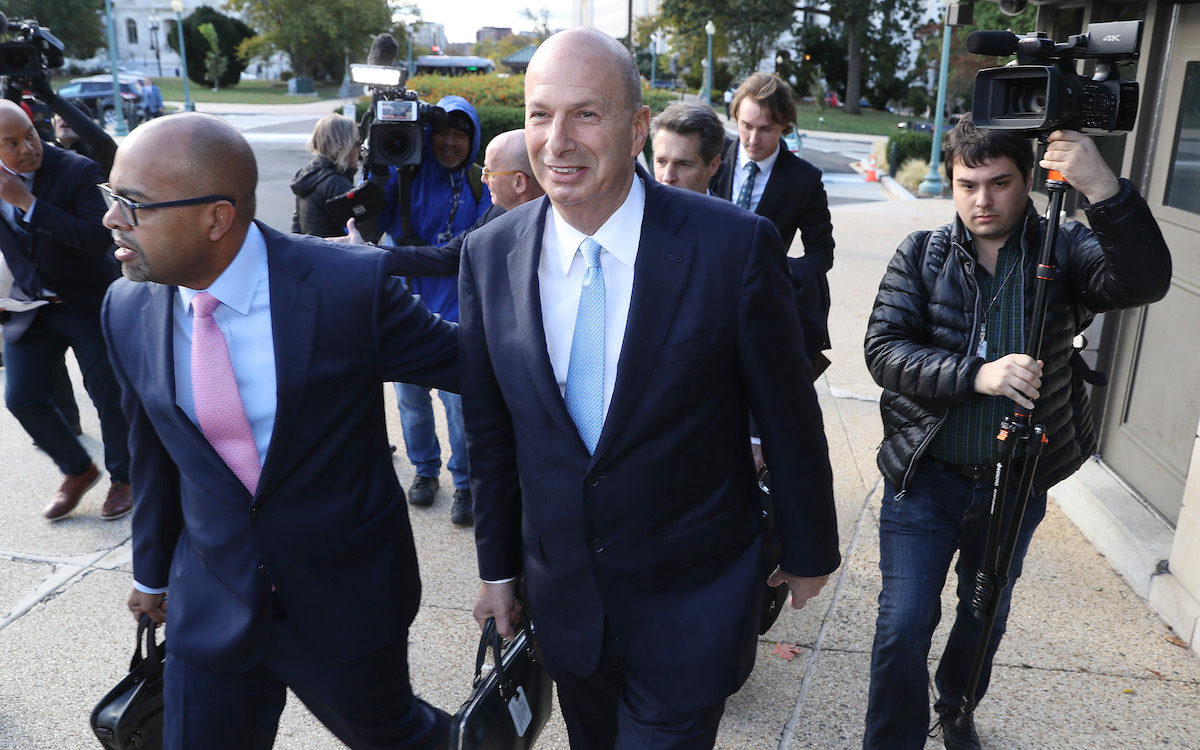 Gordon Sondland, the U.S. ambassador to the European Union, testified before Congress last month regarding Donald Trump’s attempts to get Ukrainian President Volodymyr Zelensky to dig up dirt on Joe and Hunter Biden. Sondland, who donated $1 million to Trump’s 2016 campaign, seemed to try to paint himself as an innocent bureaucratic babe, just following Trump’s orders and placing the blame for any inappropriate actions solely at the feet of Rudy Giuliani.

Except now, Sondland has returned to Congress with four new pages of testimony after he says he “refreshed [his] recollection.” In reality, there were a lot of holes in Sondland’s story and even more arose with each new witness that’s testified since. Some Democrats had reportedly been raising concerns that Sondland had perjured himself during his testimony.

A lot of sketchy stuff has come up in subsequent witnesses’ depositions. Like how his text messages with former special envoy to Ukraine Kurt Volker show that he had a habit of pivoting to phone calls when issues of propriety came up over text. That sure looks like he doesn’t want to leave a communication trail, but he insisted “I simply prefer to talk rather than to text.” Totally innocent and normal stuff!

Sondland admits to speaking with Rick Perry before his deposition to “refresh” his memory on certain things, and consulting his lawyer before doing so.

This is the kind of communication between witnesses that Democrats said they were trying to avoid with closed-door depositions. pic.twitter.com/x8H6veTdp7

In his opening statement, Sondland said he would never have recommended Giuliani, a private citizen, be so involved in foreign policy. He said the focus on the Biden family was part of “Mr. Giuliani’s agenda.” Yet despite all the power he says Giuliani had in regard to foreign policy, Sondland said he couldn’t recall ever meeting him in person, and that they only ever communicated “a handful of times.”

This is just preposterous.

We’re being asked to believe that Sondland both

1) Understood pleasing Giuliani was the key to getting Trump to soften towards Ukraine, as Sondland wanted; and

2) Didn’t familiarize himself with what Giuliani *actually was insisting on* pic.twitter.com/TtR6jEFzQD

He also said that as Sondland, Volker, and Rick Perry reportedly took over for the entire core of the legitimate Ukraine foreign policy team, no one ever expressed “any concerns that we were acting improperly.” That, according to Lt. Col. Alexander Vindman’s bombshell testimony, just isn’t true. He said he and others repeatedly confronted or reported Sondland’s inappropriate actions.

And, of course, there’s the issue of that quid pro quo that Sondland insisted never happened. And we all know now that it very much did. And according to diplomat William Taylor, Sondland knew that was the case and told Taylor so. That’s the argument Trump and Republicans have hinged their entire defense on so far and in his updated testimony, Sondland confirmed that it’s BS.

Remarkably, Sondland paid $1 million to become a part of this colossal mess

Perjury is a difficult crime to prove, since most people speaking to Congress–including Sondland–will say they “don’t recall” something rather than say it never happened, and it has to be proven that they do remember a thing and deliberately lied. Still, Sondland would not be the first person in Trump’s orbit to be convicted of the offense. Both Roger Stone and Michael Cohen have set that precedent. So it looks like Sondland isn’t taking any chances and if anyone here is going to jail, he doesn’t want it to be him.

Bringing accountability to my twitter feed.
Turns out Sondland is a total Greg.
We regret the error. https://t.co/LFIxic6pLi