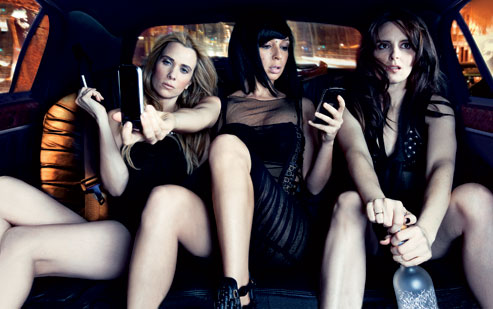 Months ago Emily Schorr Lesnick approached us and asked us if we would be interested in running her “localized study of female improvisers” that “looked at how funny women navigate gender on stage.” Naturally, we said “Of course,” “Yes,” and “Yes, please!” Over the summer she adapted her twenty-page senior capstone project to a more blog-friendly format that we’ll be running this week in three parts. The first one ran on Monday, the second on Wednesday.

And so no further introduction from me, here is Part Three of Emily’s Funny Women project, which deconstructs the dichotomy many women improvisers feel exists between being pretty and being funny. Needless to say, just because women can be pretty and funny and vice versa, it doesn’t mean they have to be the former to be the latter.

My research and interviews with fellow funny women illuminate the significance of the female comic being marked in opposition to the “ideal” woman who conforms to norms of beauty and decorum. Women who are not traditionally beautiful often rely on wit and conversely, female comedic performers are limited by beauty norms placed upon them.

“Who Says Women Aren’t Funny?”, an article in Vanity Fair synthesized a history of the dichotomy of funny/witty versus pretty:

“It used to be that women were not funny. Then they couldn’t be funny if they were pretty. Now a female comedian has to be pretty—even sexy—to get a laugh.”

While Vanity Fair may have oversimplified histories of sexism, it describes the convergence of sexism and show business capitalism on the female comic’s body.

Professor Amy Seham described how the small numbers of female improvisers in teams leads them to be forced into two roles: the pretty girl, present to portray stereotypical femininity, and the funny girl, who may be more talented than the pretty girl, but also less attractive. This dichotomy not only denies the plurality of funny women (the ability to be both funny and pretty) but also constructs divisions among women.

To understand the funny vs. pretty dynamic, I asked women to share their perceptions of humor and what funniness meant to them. When I asked them what makes a woman funny; the two college students both affirmed the qualities of self-deprecation. One admitted that she does not identify as traditionally pretty or “girly” and portrays characters like herself, often androgynous and unafraid to venture into “awkward places.” She noted that while other women might feel more comfortable turning to the role of a “sexy thing” or a “vixen,” she stated: “I don’t think I would ever trade funny for sexy” (age 20).

Many of the women I interviewed brought up the tensions of norms of beauty and femininity that often dictated their performance, specifically the dichotomy drawn between funny women and pretty women. Echoing a sentiment shared by many funny women, a recent college graduate shared that both in scenes and off stage, “I’m usually the funny girl as opposed to the pretty girl” (age 24). She admitted her talent, but also dismissed the possibility for beauty in addition to her intelligence.

A college student noted that self-deprecation allowed for women to justify their presence and claim agency in who is the butt of a joke. Along with dominant beauty norms, female improvisers confront dominant norms of femininity. Both students described the ways that they see funny women struggling with the potential for embarrassment or shame on stage, the fear of “how will it look or sound?” (age 20).  This struggle to maintain agency on stage,  sometimes results in a caution or guardedness in performance — the very quality that improv is not.

Almost every woman I interviewed addressed the tensions of norms of beauty and femininity that often dictated their performances, specifically the dichotomy drawn between funny women and pretty women. A performer reflected that she was “not pretty or popular, but I was funny and the class clown” (age 31). An improv performer and teacher repeated rejections she had received from auditions: “You’re not an ingénue type; you’re more of a character” (age 35), and another improv teach shared that she realized that she was not attractive but that she could gain power in middle school through making people laugh, stating: “Maybe you can be pretty and funny in day-to-day life, but on stage, no” (age 32).

I’m not trying to be redundant,  but I want to emphasize the potency of this dichotomy, a tension that all women and girls have navigated since birth and that often is most intense in a performance environment. Many funny women shared that they told jokes in elementary and middle school to gain popularity in spite of not being traditionally pretty. Being funny provided them with alternate routes to power, but also once again illustrates the dichotomy: if you cannot be pretty, you can be funny.

The correlation between being witty and possessing both verbal intelligence and public command of space denotes wit as a domain of men. Women that are funny thus conflict with ideals of womanhood, and are thus labeled as ugly, loud, awkward, etc.

Labeling funny women as ugly (by men and women alike) has served as a silencing and policing mechanism, a way of denying women’s “masculine” qualities or their ability to contend with dominant narratives through their intelligence, wit, and funniness. This of course, renders funny women less threatening. While the opposition of wit and beauty has been fundamental to the experiences of my interviewees and of many funny women, sources like Vanity Fair’s piece  provide sexualized images of famous funny women like Tina Fey, Kristin Wiig, and Maya Rudolph. These women occupy both poles of beauty and wit at once, but also are labeled as exceptions, are hyper-sexual and made into commodities.

One woman I interviewed described a popular t-shirt among female ComedySportz performers and lamented the way its mantra reaffirmed the dichotomy between beauty and wit, leaving a semi-positive, half-assed affirmation. “Some women are pretty. Some women are funny. I’m pretty funny.” The shirt ignored funny women’s abilities to be everything at once: pretty and funny, simultaneously and completely.

Emily Schorr Lesnick is a recent graduate of Macalester College, where she studied identity, comedy, and girl geek culture.  Her writing has been featured on guffawmn.com. You can follow her on Twitter @ESchorrLesnick.