Solitaire birds battled one another with knobs of bone that could grow as large as a ping-pong ball. 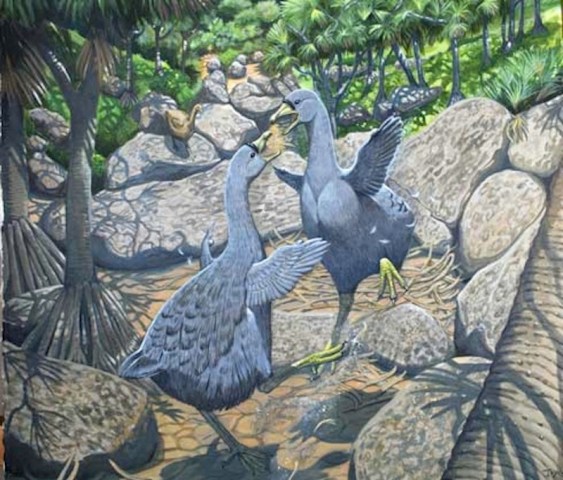 We all know the cautionary tale of the dodo, a flightless and guileless bird that spent millions of years evolving to an adorable and harmless form only to be rendered extinct after just a few generations of contact with humans. What you might not know is there was another very similar creature — the flightless solitaire bird — that went extinct around the same time. So why does no one encourage us to remember the solitaire bird on Earth Day? Well, mostly because dodos make kind of cute mascots and good arguments against making things extinct, while solitaire birds were famously aggressive and…well, kind of jerks.

Julian Hume and Lorna Steel of the Natural History Museum did some digging and found that these famously aggro animals — about whom little is known — and found that the giant, flightless pigeons did have a use for their wings after all — as potentially deadly weapons sporting bone growths as large as ping-pong balls. Covered in a layer of thick skin, these bones would have acted as boxing gloves of sorts for the birds during battles over mates.

Hume and Steel found that while birds of both sexes developed the growths, they were much larger in males, suggesting that the bone growths were used in combat, with males defending their mating rights or territory from competitors by wailing on intruders with their bony fists. While the solitaire bird is no longer with us, anyone who has been at a singles bar near closing time will be familiar with the concepts at play here.

The same principles remain with us in modern birds, as well, says Hume, though the weapons are different:

Some other bird species today have a similar ‘knob-like’ structure or a different type of weapon in the wing, such as a spike, but there is nothing exactly like the musket ball of the solitaire.