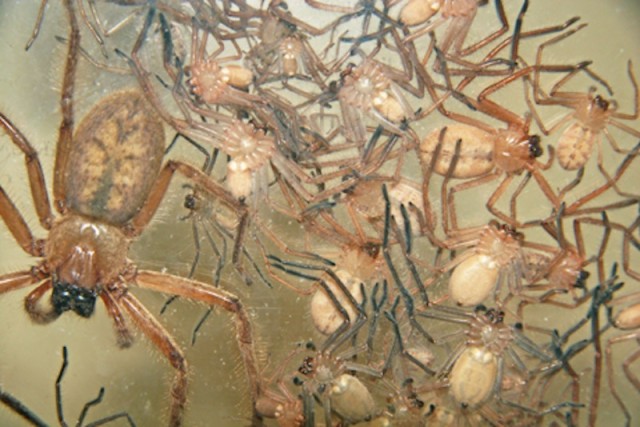 For some species of social spiders, it seems the family that lives together, kills together. A recent study in the journal Animal Behavior shows that young spiders who live with alongside their older siblings grow up big and strong, at least in part because they’re dining on the leftovers brought home by their older siblings.

It turns out that your kid brother eating the last half of a sandwich you brought home and put in the fridge is not a phenomenon unique to humans. In Australia, huntsman spiders wait until nightfall to go in search of prey, and usually eat on the road. Sometimes, though, they’ll drag the remains of a particularly juicy kill back to their “retreats,” where they live alongside hundreds of siblings. When an easy meal like that presents itself, the younger spiders aren’t shy about helping themselves to a better feast than they could find on their own.

Since food sources for young spiderlings are generally limited, having a big brother or sister bring back a doggie bag can mean the difference between a young spider getting a meal and not. According to the study, young spiders that lived alongside older siblings were between 7 and 17 percent heavier than spiderlings who didn’t have the benefit of older siblings

This discovery could help to settle a longstanding debate among researchers about why certain spider species live in colonies of arachnids from many generations. In the meantime, the fact that Australian spiders live in huge spidery colonies has settled any remaining question as to whether everything is more terrifying in Australia. The answer, of course, is yes it is.