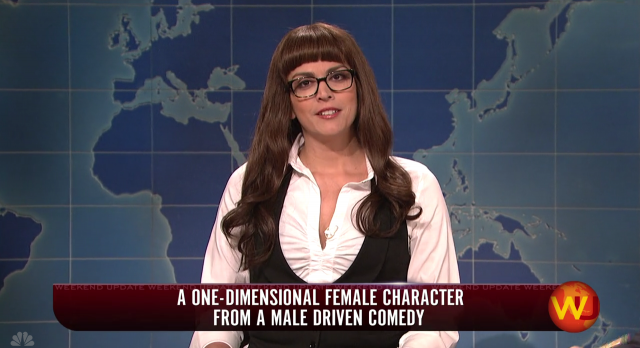 Saturday Night Live brought back their One-Dimensional Female Character sketch (illustrated brilliantly by Cecily Strong) to address the results of the study where linguists analyzed every Disney princess movie to discover that–rather disappointingly–most of the films from its “Renaissance era” (otherwise known as the films between 1989-1999) were dominated by male dialogue, even though these are films specifically about female characters.

This isn’t the first time the One-Dimensional Female Character has appeared on Weekend Update to hilariously highlight the problems with portrayals of women in movies and the ridiculous tropes that a lot of male-driven comedies tend to perpetuate–like a female character’s attractiveness simply being obscured by a pair of large-framed glasses, or eternally sleeping in her boyfriend’s football jersey. In other words, a lot of male wish fulfillment.

In last night’s sketch, the One-Dimensional Female Character–named “Heather”, as we eventually learn–would be more than happy to talk to you about her lack of time on-screen, but a man is going to explain it to you instead. Never mind the fact that she’s the one in the movie’s title:

Heather runs out of time at the end, so she just shuts off instead. “Otherwise, they’d have to pay me like a man,” she says. The truth hurts, don’t it?