Look, smoking is a nasty habit and harder than hell to kick. Whatever you've got to do, we're willing to salute the effort. 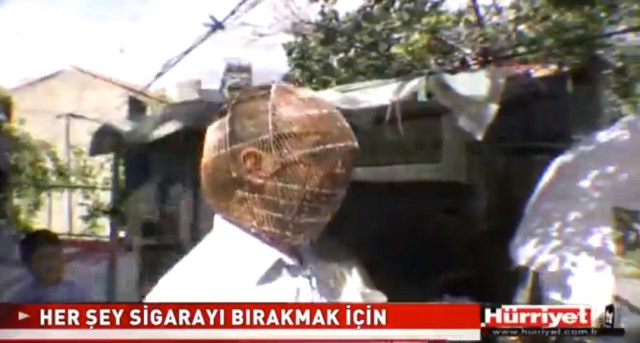 42-year-old Ibrahim Yucel has smoked for more than two-and-a-half decades, but he’s trying to give up the habit for his family’s sake. It hasn’t proven an easy task, though, so Yucel has developed a rather extreme way to help him kick the habit — every day, he dons a wire helmet that makes it impossible for him to smoke a cigarette. The Saw-style head cage doesn’t prevent Yucel from wanting a cigarette at work, but since the Turkish father of three leaves the keys to the locked helmet with his wife and kids every day, it does prevent him from following through on the craving.

Presumably, one happy side effect of the head cage is Yucel also losing a couple of pounds, as it’s hard to see how he would get lunch while looking like Bioshock‘s Big Daddy. Frankly, considering how many potential health benefits we’re talking about here, we could see head cages becoming the next hot Hollywood diet trend. Just have a personal assistant lock you in the cage for 12 hours a day and watch the pounds melt away.

Speaking as someone who has tried to quit for years with varying degrees of success, this seems like a brilliant idea that doubles up Yucel’s motivation —  not only is he prevented from smoking, the only way to stop living his life in a big terrifying metal helmet is to control his cravings. That’s an impetus for giving up tobacco if I’ve ever heard one, especially in the middle of summer, as man, it has got to be hot in that thing. And while it may seem silly to folks who have never tried to quit smoking, you can’t question Yucel’s intentions. The father of three lost his own father to lung cancer and is determined not to leave his family the same untimely and ugly way.

Whatever you’ve got to do to pull that one off, Ibrahim, it’s worth it. Our hats — and our wire helmets — are off to you, sir.