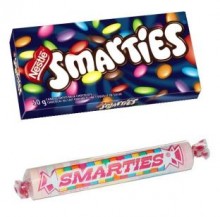 Ce De Candy, the maker of American Smarties, is suing Amazon for trademark infringement because the online marketplace is selling the other Smarties. Let’s pause for a moment and examine the context. The other Smarties were first created 60 years before Ce De Candy’s product. If anything the original makers of Smarties, which happens to be Nestle, should be suing Ce De Candy. In an attempt not to get shut out by the international Smarties, Ce De Candy has renamed its product abroad, because it knows it would lose to the older, more beloved sweet.

So let’s look at the ridiculous of it all: Ce De Candy came second, Amazon isn’t even the ones really selling the candy, just other third parties using the site, and it’s candy. This suit better get thrown out, especially as long as it’s attacking Amazon and not the actual vendors. Or Ce De Candy could rename its product to something that isn’t already taken.

(Via TechDirt, image via Faster Pussycat)