Sleepy Hollow Recap: For the Triumph of Evil

And this episode’s Headless Horseman With an Automatic Weapon Award for Ridiculousness goes to… *drumroll*… pop goes the eyeball.

We start with Abbie being brought into the station to help Captain Irving and a forensic psychiatrist deal with a suspected perp who’s just been arrested. Except, surprise! The suspected perp is teenage Abbie, and she’s being interrogated about the demon in the woods by Ichabod. Oh hello, dream sequence! Things venture into nightmare territory when Ichabod goes all white-eyed and tells adult Abbie that the truth will set her free. Then she finds herself locked in the interrogation room with a creepy-as-heck Wite-Out demon.

She’s called in to help deal with some random person who’s threatening to jump off a building and only wants to talk to Abbie. The weird thing is that Abbie’s never met this person before. The weirder thing is that it’s Dr. Vega, the forensic psychiatrist from the dream she just had. Dr. Vega hangs out on the ledge just long enough to tell Abbie that she believed her sister Jenny about the demon in the woods and is to blame for not telling the truth about it before pulling a Sherlock and jumping to her death.

Except, unlike Sherlock, she actually is dead. Oh, and she has creepy white eyes, the same as Ichabod did in the dream. She mentions the eyeball issue to Ichabod, and clearly something twigs for him because he rushes over to the body to take a look. That’s when one of Dr. Vega’s eyeballs pops like a cloud of dust. Ewwwwwww. Better or worse than last episode’s Pez dispenser John Cho?

(Side note: Ichabod is still in his old clothes. I don’t care how many times you wash your centuries-old coat in a hotel room sink, sir, it’s gonna smell like death. Literally. Someone take this guy to Goodwill. Just not to the barber, please and thank you.)

It turns out that Dr. Vega was a resident psychiatrist in one of the facilities where teenage Jenny spent some time. Abbie tells Ichabod about her dream, and he insists that it was a prophetic dream, which makes complete sense because the book belonging to MY BFF GENERAL WASHINGTON talked about two Witnesses who would see that sort of crazy stuff. At first Abbie refuses to accept that she’s one of the “capital-W Witnesses,” but it’s pretty clear that she knows she’s part of something, even if she doesn’t want to admit it. She’s seen a Headless Horsemen. And a witch. And her best friend’s a Revolutionary War soldier who’s been dead for several hundred years. At a certain point it becomes hard to Scully things.

The pair of them go to the archive to do some good ol’ fashioned investigating and discover that, like Dr. Vega said on the ledge, she didn’t really think that Jenny was crazy. But she kept quiet for fear of what would happen if she said “Yeah, you know that girl who says she saw a tree demon? I think that’s legit.” To figure out the supernatural element Ichabod says they need to speak to Jenny, since she’s their only lead.

Abbie doesn’t want to, but it’s a moot point, because when they go to the psychiatric hospital Jenny flat-out refuses to see her sister. It’s also at this point that Abbie finds out that Jenny’s in room number 49, rendering the Ghost Sheriff’s earlier statement not to be afraid of the number 49 a wee bit less cryptic.

Jenny does agree to see Ichabod, because she’s curious. She asks whether he’s Abbie’s boyfriend, to which he responds: “We are amicable, and I am male, but I suspect you’re implying something else.” Please let there be a fic where someone tries to explain the concept of “friendzoning” to him and he gets completely horrified, as well he should.

Ichabod tells Jenny that he believes her about the demon in the woods and that the four Horsemen are coming. He doesn’t think she’s crazy, he says, and neither does Abbie. But Jenny refuses to help on the grounds that the Apocalypse is on its way and there’s nothing she—or anyone else—can do.

I don’t know. I’m pretty confident that Jenny Mills could punch Death in the face. And he doesn’t even have one.

Ichabod confronts Abbie about the rift between her and her sister, and it comes out that after the incident with the demon trees Abbie straight out refused to back Jenny up about what they’d seen. She’d asked Jenny to stay quiet, since they were orphans who’d finally gotten into a good foster home, but when Jenny said one thing and Abbie said another the “sane” sister got to go back to her life and the “crazy” sister was carted off to be institutionalized.

There’s one more person who saw the demon and never admitted it: A rancher named Mr. Gillespie. He’s visited by the Wite-Out demon and ends up going slightly unhinged and taking his wife hostage. Like Dr. Vega, he asks to see Abbie, He tells her that the Sandman (yaaaaay, no more calling him the Wite-Out demon!) is coming for her next and then shoots his brains out.

Previous to this we got a short scene where Irving goes scary police captain over someone hanging this decapitated road sign in his office. People are dead, he says, and you guys are making stupid jokes? I don’t think I’d last long as a police officer in Sleepy Hollow. I’d tell the Captain not to lose his head and get fired in two seconds flat.

Turns out the person responsible for the bad joke is Luke, Abbie’s ex. Irving pretends that he doesn’t think Luke is a raging jerknozzle, but we know better. He asks Luke whether he’s the one who used to date Abbie, and when Luke asks him how he knew he says “Assume I know everything.” Well I know he knows how to be a stone-cold badass!

After the incident with Gillespie Abbie tells Ichabod that the Sandman is coming for her next, since she, like Vega and Gillespie, didn’t do anything to help Jenny even though they all knew she was telling the truth. They go to the archive and Abbie introduces Ichabod to the sweet world of energy drinks so they can get their research on. Ichabod figures out that the Sandman is actually a Mohawk dream demon named Rock… Rochoron… Rochoronties… uh, let’s just call him the dream demon, OK? His thing is that he targets people who lets bad things happen to others and ramps their guilt up to eleven so they kill themselves. A Mohawk shaman is needed to defeat the Sandman, so Abbie has to break the news that post-American Revolution the new government was not particularly kind to Native Americans, to say the least. Ichabod is appalled, since he worked with the Mohawks during the war.

Conveniently, Abbie knows where to find the modern-day equivalent of a “Mohawk shaman”: Seamus Duncan, a used-car salesman who is a Mohawk and just so happens to A) believe in the dream demon and B) know how to fight him. He needs a little convincing, but he eventually agrees to help out when Ichabod pulls out the quote “All that is necessary for the triumph of evil is that good men do nothing.”

Is it just me, or did Sleepy Hollow handle Native Americans with a liiiiiittle less cultural sensitivity than it did when it refused to make Ichabod a special snowflake for disapproving of slavery back in the day. Granted, Seamus did say to cut it out with the stereotype schtick, because he doesn’t live in a teepee or a participate in pow-wows, thank you very much. And that was cool. But the way the Native American of course believes in the dream demon and of course knows how to defeat it using “ancient Mohawk knowledge” had me wincing big-time.

But on the positive side: Seamus’ car lot is called Geronimotors, and he asks Ichabod and Abbie whether they’re into time travel, because he has a mint-condition DeLorean he can sell them. *deep breath* I love the smell of bad puns and “I see what you did there” in-jokes in the morning.

Abbie has to defeat the dream demon on his own turf, meaning in the dream world. Unlike in Inception, if you die in the dream you die in real life. Abbie was all prepared to go it alone, but Ichabod volunteers to be the sidekick. After drinking the dream tea he recites the ingredients, because he may not know about energy drinks or automatic windows or electricity, but he knows from roots, OK?

To be able to control their actions in the dream world they need to be stung by scorpions, so they’re both strapped to tables… shirtless. 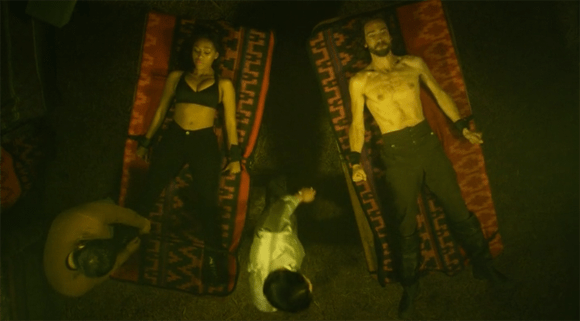 Seamus explains that they need to be tied down so they won’t hurt themselves thrashing around, but I’m going to go ahead and say that a scorpion is perfectly capable of stinging someone through a layer of cotton.

But… nope. I’m not complaining.

Once in the dream world they get separated: Ichabod finds a weird red door in a forest, and the dream demon takes Abbie to watch teen!her selling out her sister. After Abbie’s subjected to a bit of mental torture Ichabod ends up in the interrogation room and tells the dream demon to lay off, but instead he uses sand to chop dream!Ichabod’s arm off. The distraction is what Abbie needs to gather herself: She admits to the dream demon that she lied to protect herself and that she was a coward who betrayed her sister but she won’t do it again. Apparently all the dream demon needed was a “whoops, my bad,” because he turns into glass, making it really easy for Abbie to shatter him with a chair.

Back in the real world a thoroughly exhausted Abbie and Ichabod talk about the seven years of tribulation they, as Witnesses (Abbie’s fully accepted it now), will have to face. Irving walks in and offers them a key to the archive so they won’t have to keep sneaking in through those dank old tunnels. Irving knew they were using the off-limits history Batcave the whole time. Irving knows all.

Going through the whole ordeal with the dream demon made Abbie realize that she needs to go apologize to her sister and try to mend the rift between them. But when she gets to her room she finds that Jenny’s pulled a Sarah Connor and escaped.

Overall verdict
This episode is about the same quality as last week’s, which is to say: Good. I like how Abbie and Ichabod’s relationship is progressing, though while last week they were my OTP this week they are my btOTP. I see a lot of waffling around in my future. Mmmmmm, waffles.