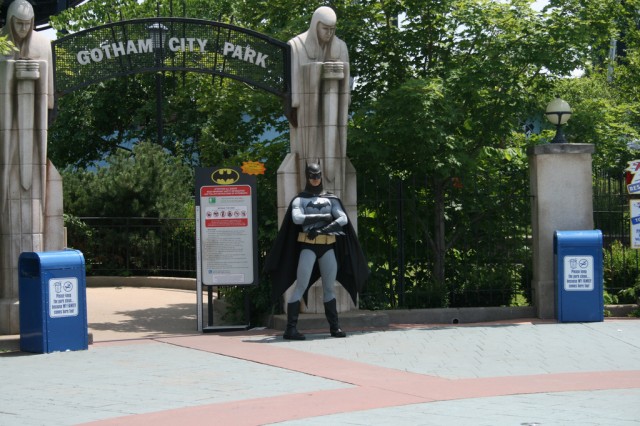 If you’re like me, you haven’t been to a Six Flags theme park in roughly a decade, but that might just need to change come 2015. Most (if not all) of the 18 or so Six Flags parks around North America have had a DC Universe or Gotham City area since the 1990s. Growing up in Atlanta, I remember when Six Flags over Georgia opened their Gotham City area. Even as a cynical teenager, and despite the insanely cheesy stage & stunt show, it instantly won the affection of my geeky little heart. I still can’t explain, to this day, how simply painting the Mind Bender green and throwing some question marks on it made the already 20-year-old roller coaster infinitely better, but it did.

Now, with Batman v Superman: Dawn of Justice in production, Six Flags has announced some new DC-themed rides for four of their parks:

In this interactive 3D ride, guests will pile into four- to six-person cars, don 3D glasses, and wield laser blasters as they’re carted around Metropolis and the Hall of Justice on a mission to save Green Lantern, Wonder Woman, The Flash, and Supergirl from Lex Luthor and The Joker. (Those familiar with Universal’s Islands of Adventure theme park will feel right at home in this ride.) I’ve yet to see any explanation as to how four of the most powerful superheroes in the world have been kidnapped, but I suppose some suspension of disbelief is a reasonable thing to ask for here.

The Joker Chaos Coaster and Harley Quinn Spinsanity
These two new rides will both be opening at Six Flags Over Georgia.

The Joker Chaos Coaster isn’t a roller coaster per se, but a loop ride in which a row of cars will rock back and forth along a single, circular track, gaining speed and height until finally achieving several 360 degree rotations a full 72 feet in the air.

The Harley Quinn Spinsanity is essentially a Tilt-a-Whirl with a sweet paint job. I’m a tiny bit sad that the developers at Six Flags weren’t more creative with their Harley Quinn ride, but I’m delighted to see that she’s finally getting some recognition as the wildly popular character that she is.

Batman: The Ride
There are already several Batman: The Ride coasters throughout the Six Flags parks, but this behemoth opening in Six Flags Fiesta Texas (San Antonio) promises to make them look like they should be in the children’s area.

The only actual roller coaster out of the new DC-themed attractions, Batman: The Ride is so intense that riders are likely to be defending the streets of Gotham with projectile vomit. This coaster’s cars, rather than sitting in a boring old line like you’re used to, spin around as they dangle over the sides of a weaving track unlike any I’ve ever seen. Really, I can’t even begin to do this ride justice; it really must be seen to understand how awesomely terrifying this thing is.

Eris Walsh (@SheGeeksBlog) is obsessed with Batman, Neil Gaiman, chemistry, Doctor Who, and baseball. She also enjoys scouring conventions for fantastic examples of cosplay craftsmanship and discussing role-playing games (both table top and LARP), comics, movies, etc. with other enthusiasts. Eris can also be found on her blog She-Geeks, where she writes about geek stuff; local New Orleans radio show The Week in Geek, where she talks about science stuff; and on the Krewe du Who community webpage, where she posts weekly reviews of current Doctor Who episodes.