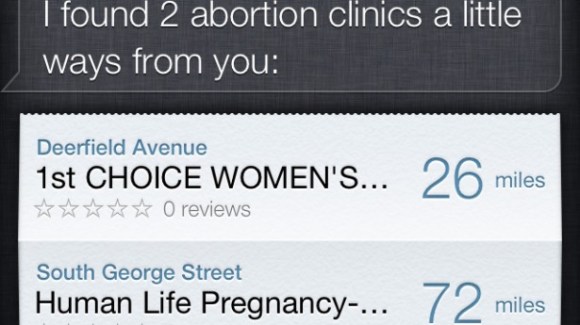 Huh. So this is interesting. While most of us are busy worrying about whether Apple’s new Siri program on the iPhone 4S will eventually turn into Skynet, folks have been testing its limits (or just saying ridiculous things to it while intoxicated). It seems that when you ask the intelligent software assistant where to get an abortion you’ll get responses that range from anti-abortion crisis centers in the next state over, to absolutely no results, but not actual places to get abortions. The same goes for asking about places you can obtain emergency contraception. So now we pose this question to Siri, “Are we reading too much into this or is that a little odd?”

The Raw Story has looked into the matter and found “if you happen to be in Washington, D.C., she won’t direct you to the Planned Parenthood on 16th St, NW. Instead, she’ll suggest you pay a visit to the 1st Choice Women’s Health Center, an anti-abortion Crisis Pregnancy Center (CPC) in Landsdowne, Virginia, or Human Life Services, a CPC in York, Pennsylvania.” And when asked in New York City, Siri apparently responds, “I didn’t find any abortion clinics.”

As that simple google search reveals and the website also points out, “Ask Google the same question, and you’ll get ads for no less than 7 metro-area abortion clinics, 2 CPCs and a nationwide abortion referral service.” Ok, but what about things that could prevent someone from seeking an abortion in the first place? “It’s a similar experience for women seeking emergency contraception: in New York City,” writes TRS, “Siri doesn’t know what Plan B is and, asked for emergency contraception, offers up a Google results page of definitions.”

The blog The Abortioneers has done their own research into the software quirk. They point out that Siri is quick to give an answer when asked, “Where can I hide a dead body?” but will simply not give an answer about birth control or abortion. And it’s not as if the software is avoiding health related issues, perhaps for the sake of avoiding law suits, there’s plenty of answers in that category. Siri will tell you what to do if you’ve had an erection for more than five hours, where to obtain Viagra, let you know where you can get a pacemaker and also give you a listing for escorts if you tell it no one will have sex with you. Here’s a few other items TRS learned about:

All of that yet Siri appears reluctant to offer information on abortion clinics. What gives?