Was the Monster-Sized Slipper All an Elaborate PR Stunt? 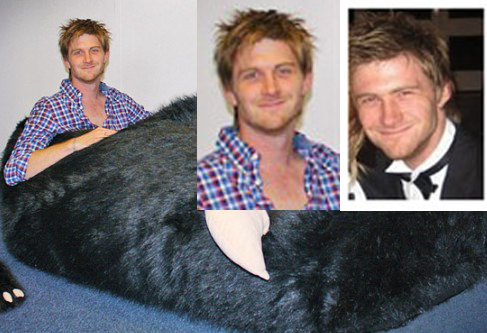 What was at one time a straight forward, if strange, story of a communications mix-up that resulted in an enormous slipper has suddenly taken a turn into the mysterious. As we, along with several national news outlets reported, a man by the name of Tom Boddingham claimed that he’d ordered a size 14.5 slipper and received a size 1,450 by mistake.

However, a post by the UK Guardian’s Polly Curtis casts some doubt on this story. In her research, Curtis found a tweet from @william_summers that highlighted how the Boddingham looked exactly like Monster Slipper web manager Joe Jennings. Jennings’ twitter account @mrjoejennings has since gone dark, but the picture above and on the right was pulled by the Guardian before the account went down. In the wake of what is being called “giant slippergate,” several news outlets are now calling the whole thing a massive PR stunt.

While similarity of appearance is highly circumstantial, this does make the story seem quite a bit fishy. But how can we be sure that this new evidence is not itself some kind of viral marketing ploy? Welcome to the 21st century, where each passing day becomes more like a Philip K. Dick novel.

(via UK Guardian, thanks to our commentors)