Giant Squid Footage is Actually of a Giant Squid, And It’s Apparently Silver 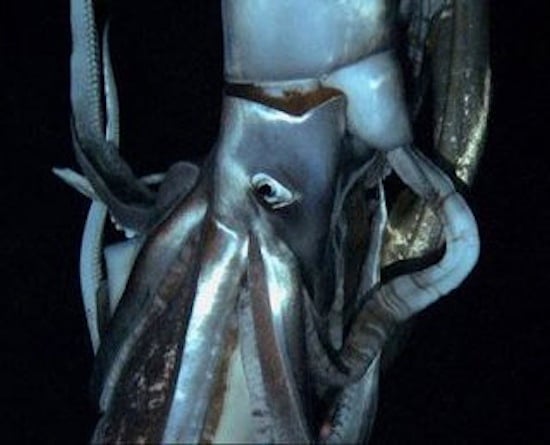 Last month we reported that a film crew from Discovery Channel had captured footage of a giant squid at home in the inky blackness of the ocean’s depths — the place where all the most horrid nightmares are born — for an episode of the cable network’s Curiosity series. Since we’re inclined to take a “pics or it didn’t happen” view of the world over here, it’s safe to say that we were all dubious of the claim, especially when past experience has shown that such overhyped discoveries are often run-of-the-mill colossal squid that don’t even merit a second glance. Today, though, we’re delighted to report that our cynicism was, for once, unfounded. The team of giant squid enthusiasts behind last month’s bold claim has released this photo of the legendary aquatic beast that caused superstitious vikings and pirates to soil themselves at the mere mention of it — we assume.

Discovery Channel had worked closely alongside Japan’s National Science Museum and the country’s public broadcaster NHK to obtain this extremely rare footage, not to mention a ragtag group of roughneck sailors found at a local dockside pub, willing to lend a hand for a few yen and a bottle of hooch — again, we assume.

Three researchers, forgoing the comfort of adequate legroom in a small submersible for the sake of science, searched for the giant squid deep in the north Pacific Ocean, nine miles east of Chichi island. At 630 meters, the crew had finally captured substantial footage of the massive creature in its natural habitat after coaxing it out with an unfortunate bait squid that most likely didn’t consent to its important role in the expedition. Up until now, traveling to such depths to study giant squids has never been accomplished successfully due to the crushing pressure of the above water and the potential for cramping legs.

Museum researcher Tsunemi Kubodera, one of the three in the submersible, told reporters that the team pursued the giant squid for an additional 270 meters and got an excellent look at the monstrous majesty of their quarry which — and this may come as a surprise to most — came in a lustrous shade of silver. Tsunemi said:

It was shining and so beautiful. I was so thrilled when I saw it first hand, but I was confident we would because we rigorously researched the areas we might find it, based on past data.

Kubodera also noted that the giant squid in question was missing its two longest arms, one of the creature’s most identifiable features. While he couldn’t provide an explanation for its errant appendages, those up on their giant squid trivia know that such wounds come from either encounters with its known natural predator, the sperm whale, or the species’  lesser known penchant for settling disputes with knife fights.

Though Discovery Channel will not be releasing the footage at this time, we don’t have long to wait since it will air in its entirety for Curiosity’s season finale in the episode ” Monster Squid: The Giant is Real.” So mark your calendars for January 27th, because this will be the thing cephalopod enthusiasts the world over will be talking about the following morning. You don’t want to be left out in the cold, do you?