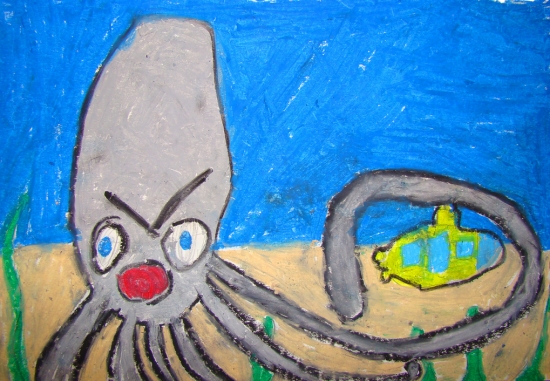 Seen here in an artistic interpretation, the giant squid is thought to be the inspiration for many sea monster stories throughout history like the Kraken, Scylla, Cthulhu, and probably Sharktopus, but it refuses to be taken alive. It won’t even let its picture be taken alive, until now that is. A film crew for Discovery has captured the first footage of a live giant squid in its natural habitat, probably doing squid stuff.

The crew was filming for an episode of Discovery’s Curiosity series titled “Monster Squid: The Giant is Real” when they came face-to-face with the elusive beast. The giant squid has long been considered the “holy grail” of wildlife filmmaking, and up until now only dead specimens have been filmed. That’s probably just because earlier filmmakers chose poorly.

As much as we’d love to show you the footage, it seems like Discovery is going to be sitting on it until Monster Squid premieres on January 27th as the season finale of Curiosity. It’s a good thing they actually tracked down some footage of the giant squid, otherwise they would have to have called it “Monster Squid: The Giant is Probably Real, but We Can’t Say for Sure Because We Didn’t Get Any Footage,” and the whole thing would have been pretty anti-climactic.

Until the premiere, you can always do what we’re doing: Watch clips of Monster Squad on YouTube.

(via Discovery, image via tsand)