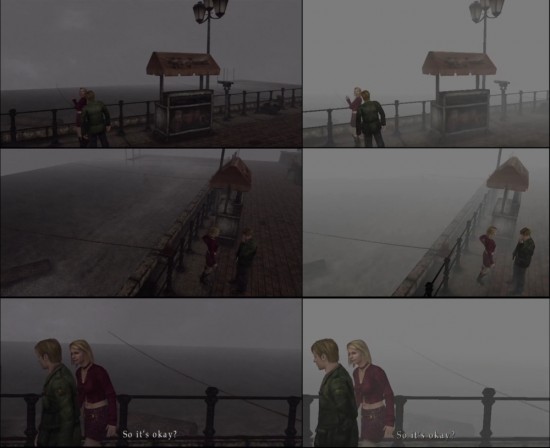 Any fan of Silent Hill will immediately defend the use of grainy textures, the visual noise filter, and the insanely thick fog that covers up most of the environment. The series is about horror, and the best kind of horror is atmospheric and psychological, not the kind where zombie dogs jump through windows at you and go “rawr.” When we first got word of the Silent Hill HD re-release, we were stoked, as one of the two games included in the re-release, Silent Hill 2, is the highpoint of the series, as well as the entire genre of horror in general. Unfortunately, the re-release seems to have entirely missed the point of Silent Hill to focus on the high-definition aspects of it instead, and former Silent Hill art director through most of the series high points, Masahiro Ito, isn’t impressed. In fact, he said it was “poor.”

As one can see from the images above, the left side is the “remastered” re-release, which seems to remove a lot of the fog and take some (if not all) of the grain away. Aside from this being a problem itself in that clear, concise imagery isn’t exactly the best way to convey the town of Silent Hill’s extremely unsettling and mysterious atmosphere, there’s another problem: It reveals what is in the distance in most of the scenes. It turns out, not much is drawn in the distance, as the game was covered in thick, generally opaque fog, so there was no reason to draw the game in at such a far distance. Obviously, revealing the vast emptiness of the environment is a problem.

On Twitter, when Ito found out that the above screenshot comparison is from the finished, retail copy of the re-release, he simply exclaimed, “OMG!!!!” When the art director of a series that had some of the most amazing art direction and environments in video games to date can’t believe something was allowed to be released in the state it was released, you know you have a problem.

As a huge, huge Silent Hill fan, it pains me to say that unless the re-release is updated with some kind of patch that addresses the issue, you’re better off experiencing the games with the original versions. Either grab a PlayStation 2 and give them a go, or be lucky and have a backwards compatible PlayStation 3 and pop in the original PS2 discs. The games are brilliant, specifically Silent Hill 2, and are worth checking out if you never have. However, a huge portion of their effect will be lost if the environments aren’t just so, and judging by those comparison screenshots, those environments aren’t very so at all.