Beyond Good & Evil, One of Gaming’s Finest Achievements that Made No Money, is Getting an HD Remake 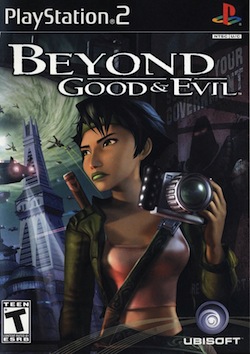 Ubisoft’s Beyond Good & Evil, one of the finest achievements in gaming history that no one bought, is getting another chance to reach the gaming masses by hopping on the recent HD remake bandwagon and getting a release on the PlayStation 3 and Xbox 360 sometime next year.

Beyond Good & Evil, brainchild of Michael Ancel of Rayman fame, follows reporter Jade as she unravels an alien and semi-government conspiracy. The game, often referred to as “Zelda for adults,” essentially took everything that was good about the common gameplay amongst The Legend of Zelda francise, dispensed with everything gamers didn’t like about Zelda, painted it with a cartoony-yet-gloomy art style, and added an intricate plot with superb writing, stellar music and a hefty dose of brilliant comedy.

Despite being one of the finest achievements in gaming history, Beyond Good & Evil, like various other unfortunate critically-acclaimed games, didn’t sell well, being slashed in price by 80% shortly after it was released in 2003. One of the reasons thought to have contributed to its poor sales was the main character, Jade, not being a wildly attractive, busty female in a video game–something that hasn’t been as much of an issue in this day and age, but was not too long ago.

Hopefully now, with the HD remake in line for release (and probably carrying the accustomed reduced price for HD remakes),Beyond Good & Evil will hit the large audience it deserves, and in turn, maybe that will spark Ubisoft to get Beyond Good & Evil 2 down the pipeline much faster.