The Town of Silent Hill in Google Maps, With Some Street View 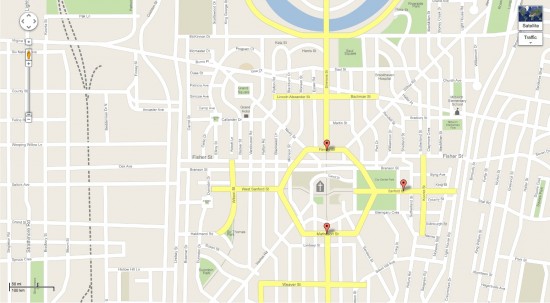 Today not only sees the release of Windows 8, but the next Silent Hill movie, unfortunately titled Silent Hill: Revelation 3D. Even more unfortunately, it doesn’t look to be following Silent Hill 2, largely considered to be not only the best entry into the franchise, but the best horror game, and one of the best examples of writing, story, and character development shining in a video game. If you’ve seen a trailer, you’ll note it looks like the movie is following Silent Hill 3, rather than the stellar 2 or the underrated and very strange 4, but nonetheless, as a Silent Hill fan, it’s nice to see the franchise get some love. As a neat promotion alongside the film, the mysterious town has been transformed into a Google Map.

Though not quite enormous, the map does feature some iconic Silent Hill landmarks, such as Brookhaven Hospital and Toluca Lake, though the streets aren’t entirely named after authors like fans of the series might be used to.

There are a few Street View options as well, showing addresses on Finney, Matheson, and Sanford Streets. Dipping down into Street View, however, won’t give you control to wander around the town, but will instead play a short clip located in that part of the town.

The first Silent Hill movie, though they actually cast Sean Bean and he essentially played the game’s main character Harry Mason, changed a lot from the game, such as not actually featuring pseudo-Harry as the main character even though they kept him in the movie with a changed name and role, for some reason. We’re not normally ones to decry an iteration of a beloved franchise when it makes changes in order for it to better fit into a new entertainment medium, but skipping over Silent Hill 2 to revisit the changed universe was probably not the best idea. Not because of the changed universe, but because skipping over Silent Hill 2 is never a good idea.

The first half of the first movie was actually just fine, and kept the psychological and atmospheric terror of the games, but right around the midway point, the entire population of the town revealed themselves and instantly broke the very delicate horror atmosphere of the franchise, the main component being isolation. Hopefully this new movie realizes and corrects that mistake.

However the movie goes, Silent Hill fans should squee a little to learn that their favorite town was recreated in Google Maps, even if it’s simply an advertisement for the movie that they most likely won’t enjoy too much. Play around with the map here.