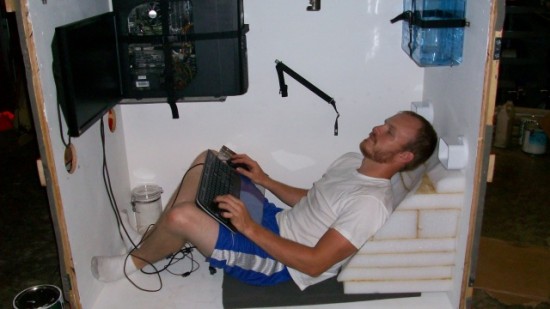 Performance artist Jordan Wayne Long is preparing to ship himself from Bald Knob, Arkansas to Portland, Oregon in a crate over the course of one week without a connection to the outside world, except for a rig which allows him to play Lord of the Rings Online. Long claims the project relates to his study of Post Traumatic Stress Disorder and related coping mechanisms, but we all know he was just looking for way to grind some levels without being bothered by the outside world.

Long’s friend Bradi Roberts will be transporting him on her truck, so he won’t be going through any kind of actual postal system, nor have to sign up for an Amazon credit card in order to get free shipping. Long plans to update the interested masses via his Twitter and has also created a blog to cover his week of playing LOTRO in a box, which should barely be any different from playing it in his room. I kid, MMO gamers, because I love. Long’s experiment is planned to take place between July 1 to July 7, and end at a Portland art gallery.