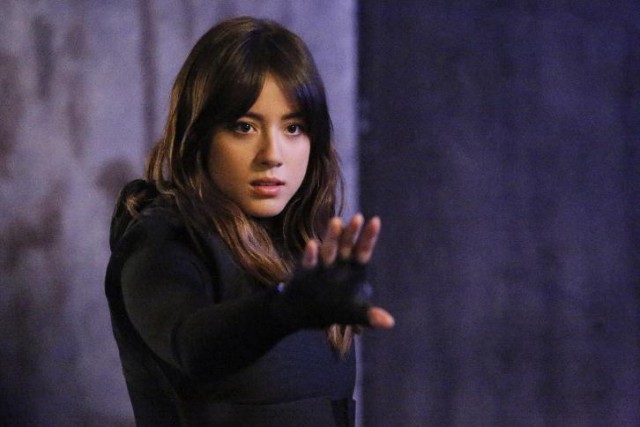 Luckily for us, Marvel’s Agents of S.H.I.E.L.D. gives us an excellent icon for women in tech with Daisy Johnson.

In “Oh, duh,” news, a recent Google report further confirmed that media representation impacts whether children believe they can—or should—be interested in certain hobbies or careers based on their demographic. In short, they found that “computer people” in television and film skewed heavily male and either white or Asian, and that had a direct negative impact on the likelihood of girls and other people of color to consider themselves someone who could successfully pursue computer science.

Beyond race and gender, the trend of “computer people” goes further into stereotypes. From Jurassic Park’s Dennis Nedry to the men in The IT Crowd, we’re largely portrayed as, at best, socially-inept introverts who are incapable of connecting to those in our immediate surroundings. The few female characters in media who are especially computer savvy are nearly always stereotypically “nerdy” or asocial—Willow Rosenberg from Buffy, for instance, is able to hack into computer systems, but it’s a skill that’s used almost exclusively during her awkward high school phase and left behind as she grows more confident and begins to pursue magic.

Of course, there’s nothing inherently wrong with people who prefer text-based interactions to in-person ones; the problem with these media representations isn’t that these kinds of “computer people” don’t exist or that any one of them is at fault, but rather that the representations leave a lot of other people out. Like all fields, technology can only be benefited by people with a broader range of skills and experiences working together, and it’s less likely to attract that broad range of skills if our media is sending the message that it’s for a narrow range of people.

SHIELD‘s Daisy Johnson isn’t altogether free from tropes (pretty much no character is), but she breaks the mold in a number of ways and sets a good precedent for more strong representations of women who work with computers.

1. She has strong moral values and wants to do what’s best for humankind.

Daisy is first discovered by S.H.I.E.L.D. while doing hacktivism with a group known as the “Rising Tide.” We learn she’s adamant about the hacker culture principle of “the freedom of information,” and early on enters S.H.I.E.L.D. as a mole to find out what they’re hiding. She cites Edward Snowden as a role model, and upon finding out about the existence of aliens, she’s determined that people have a right to know about them.

For various reasons, among them learning the one who introduced her to the principle of freedom of information contradicted that by selling it, she’s persuaded to change her stance on exposing aliens and commits herself to S.H.I.E.L.D. for real—but she’s only persuaded by coming to agree that everyone is better off if certain secrets are kept. She continues to campaign on behalf of ethics throughout the series, loudly coming out against the way certain organizations treat inhumans, and is quick to detach from people who are willing to compromise the well-being of others regardless of the relationship she’s had with them.

2. She’s compassionate and empathetic, giving everyone a chance but not compromising herself for them.

Daisy is noted as being one of the most empathetic and sociable people on the ship and is able to connect with nearly everyone around her fairly early on, helping her gain trust and get the information she wants. She tends to assume the best of people until they betray her trust in some significant way, and even after learning certain characters have done bad things, she often goes out of her way to try to find out why they did those things and talk to them before holding it against them. Even when she does dislike someone, once she has new information on what they’re going through or why they did something, she’s usually able to reevaluate her feelings in light of it.

At the same time, she doesn’t make a whole lot of excuses for people. While she may give them some allowances for not being able to control inhuman powers well, when someone is consciously duplicitous, she’s quick to eject them from her life. Her compassion is all the more powerful because, while she will make judgments on others with attention to what they’ve been through and who they’re trying to be—and while she may sometimes misinterpret their actions or be duped—she doesn’t give a lot of extra chances to people manipulating her. Her ability to empathize largely remains a skill rather than a weakness, unlike many other soft-hearted characters in fiction.

3. She’s not highly-educated, but she’s portrayed as a highly competent hacker anyway.

Daisy is a high school dropout who was an orphan and then ended up on the streets in her twenties. Even so, she’s able to hack into the NSA satellite streams in under an hour and hack into the computer in someone’s eye to see what they see among a bajillion other impressive feats. She claims she’s self-taught and used it as a way to escape from the stress she was under growing up and that it simply came easily to her.

Granted, a lot of highly intelligent people drop out of school for one reason or another (including Einstein!), and Silicon Valley has a number of entrepreneurs who were incentivized to leave to pursue their ideas. This doesn’t seem to be Daisy’s story—hers is more befitting that of a troubled youth than a savant. That she is an expert in her field without a lot of formal education or portrayal of superhuman knowledge is particularly monumental given the simultaneous push toward college and rising tuition rates we see in the US, and the fact that she was able to amass her knowledge outside of it is also befitting a culture that promotes freedom of information.

Online resources for this exist—sites like Cybrary aim to make knowledge of cyber security accessible for free and even help learners find potential careers in the field, while sites like Codecademy teach computer programming. As a character, Daisy may be exceptional in some ways, but she didn’t teach herself in a vacuum, and she may very well be a spokeswoman for the sharing of knowledge that really does exist if you look for it.

4. Hacking isn’t the only skill she has.

Daisy Johnson is a particularly good hacker, but she’s not just a particularly good hacker. She’s probably put thousands of hours into learning the skill, but she’s not portrayed as doing it exclusively. If anything, her biggest asset is determination. She’s able to manipulate other people to get information or keep everyone safe as necessary—starting with intentionally getting herself picked up by S.H.I.E.L.D. and progressing throughout the series as this poker face improves. Once she realizes how important it is for her to be a competent fighter, she focuses on training and becomes exponentially better. And, once she gets powers, she does everything she can to get control over them as soon as possible.

The message Daisy sends is that it’s possible to hold technical knowledge alongside other aspects of your personality or identity. A love of computers can coexist with a high regard for other people’s emotions and valuing your time with them. You don’t have to choose between wearing makeup or being a computer engineer—as real-life examples such as Isis Anchalee have pointed out. You can be a hacker as a woman, as an extrovert, as a fighter, or as anything else you choose, and you can use your skills to make you better, even if they aren’t the same ones that stereotypically come with the package.

Daisy Johnson isn’t the perfect representation for women in tech—such a representation cannot exist, as no one portrayal can encompass a diverse group—but as a singular example that breaks out of boxes and shows more people tech can be accessible to them, too, she’s a great addition to our cultural canon.

Edeline Wrigh is a writer, artist, and game developer who informally researches the impact of stories and creativity on people and cultures. That’s what she claims, anyway, though she actually spends a lot of time devising new ways to claim playing video games is “productive,” pining over kittens, and dressing like a fairy and dancing with hula hoops. Art, writing, and other chaos can be found via her blog.