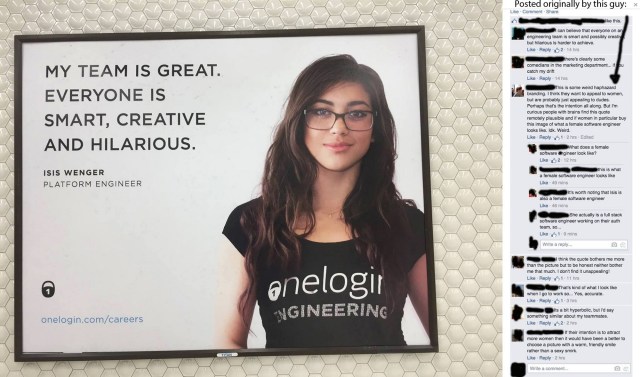 Over the past few days, the #ILookLikeAnEngineer hashtag has picked up some serious momentum, with female engineers from all different types of fields reminding gross internet people that yes, women are engineers, too.

In a Medium blog post from a few days ago, Isis Anchalee shared how the reaction to her photo on an ad for a tech company featured some really ugh-worthy (yet typical of the tech industry) comments. A part of one comment in particular struck a vibe with her. The comment said, “But I’m curious [if] people with brains find this quote even plausible and if women in particular buy this image of what a female software engineer looks like.”

To the credit of a lot of the other Facebook commenters, they defended Anchalee and called the dude out, saying, “She actually is a full stack software engineer working on their auth team, so…”

But one reply to that comment seems to be the inception point for the #ILookLikeanEngineer hashtag: “This is what a female software engineer looks like.” Since then, the hashtag has grown to feature women hailing from all parts of the technical world. SysOps, database architects, electrical engineers, sysadmins, and CEOs, all of them have converged on the hashtag and it’s pretty gosh darn moving to see.

#ILookLikeAnEngineer who could use more sleep. No need to run my creds, I’ll still be an eng without your validation. pic.twitter.com/KhCBh8LPNL

I have a degree in electrical engineering from Vanderbilt #ILookLikeAnEngineer pic.twitter.com/YvhW8oG2lg

The phrase “you don’t look like an engineer” is one of the phrases that female engineers hear the most. Considering how often it’s said to women (even in just the Bay Area), it’s an interesting insight as to what the people who say it think an engineer should look like. More than that, it reinforces this idea of a “mirrortocracy,” which is this problem where people are more likely to reward and promote other people who look like them. Given that the tech industry is still overwhelmingly male, and if they all think of themselves as the only engineers, well… there you go, status quo.

But trends and hashtags like #ILookLikeAnEngineer increase visibility are helpful (if not incredibly needed) reminders that hey, buddy, you’re not the only ones out there doing what you do. In fact, the #ILookLikeAFilmDirector hashtag seems to be finding its own footing.

You go, you lovely people, you.