Marvel has announced another comic book villain is set to go up against our agents. Who is it? Hit the jump to find out and also get bonus Amy Acker!

Marvel.com announced actor Patrick Brennan would be joining the casting of Agents of SHIELD as Marcus Daniels, a.k.a. Blackout. They write, “First appearing in NOVA (1976) #19, ‘Providence’ will mark Daniels’ live-action debut, but with his powers slightly different than in the comics: This version of Daniels will have the ability to suck the energy out of anything around him.” 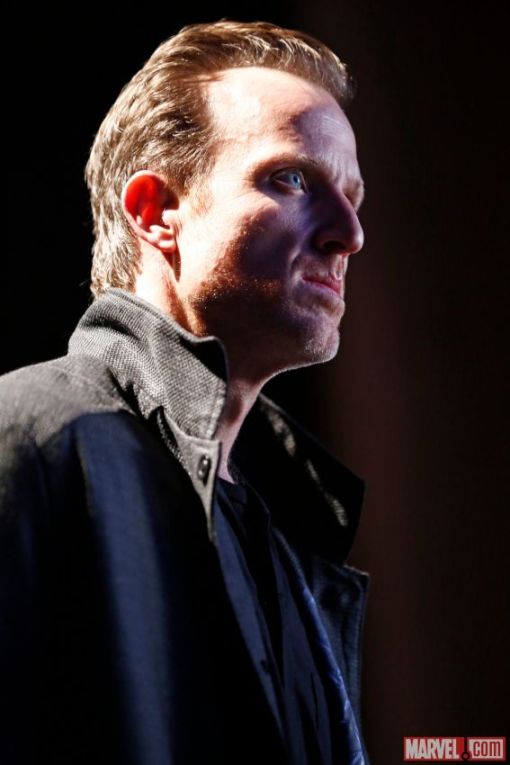 The actor gave a bit of insight into the character.

This is the way they explained it to me: This guy, Marcus Daniels, a.k.a. Blackout, was shrouded in darkness, his soul, everything about him was shrouded in darkness until he comes across this Cello player. And the music was the only light that came into his soul, and it gave him hope and it gave him some sense of what light was. I thought to myself, oh my god, you don’t even need to explain anything else. Because music, to me, is what gets me through most of the time. My kids, my wife, and music. That aspect of it totally intrigued me. I thought that was quite beautiful and very interesting, that aspect of the character.

Ah yes, the cello player. We recently found out Whedonverse favorite Acker would be tackling the character previously hinted at in The Avengers (and here’s our first look at her from the show), Coulson’s musical girlfriend, Audrey.

Acker told Marvel.com, “I was curious to see who they were going to cast as that person, never actually thinking it was going to be me. [laughs] But [I was] just excited to see how that storyline would play out. So when Clark called me personally and said how important this role was to him, that it [needed to be] cast with the right person, it was very flattering that he thought that I was that person.”

She also revealed they’d be touching on Audrey and Coulson’s past in the episode.

There’s a lot of talk [in the episode] about how it was when they were together. I think that one of the biggest things that they keep bringing up when she talks about him is how he made her laugh, and just the trust that she had for him. I [don’t’] think anyone would have a hard time falling in love with Coulson, there’s probably a long line of people with that already. It just seems like they really had a real, honest connection. I know it sounds cheesy, but [they] really [had] a soulmate-type vibe.

There’s a bit more at the source link but it’s vaguely spoilery as to the future of Audrey so read with caution.