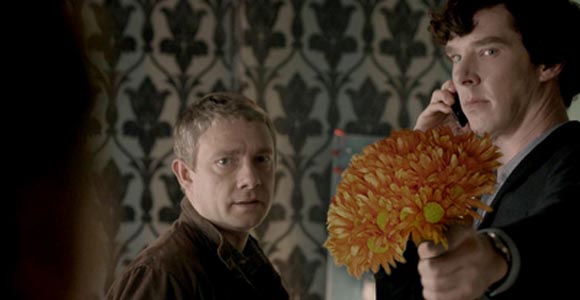 Excuse us while we Reichenbach Cry.

Honestly, we’re no strangers to waiting epically long amounts of time for our favorite U.K. shows to make it to the U.S. but I will admit we’ve been spoiled by Doctor Who. Though you can blame Benedict Cumberbatch and Martin Freeman for this one, or at least their fantastic acting ability.

Entertainment Weekly cites the actors’ “busy schedules” pushing back the start of production on Season 3 from January to March of 2013.

“The BBC has not announced a premiere date for season three, but given that January was previously announced as the start of production, fans hoped to see Holmes and Watson return in the summer,” writes EW. “Sources say the BBC will air Sherlock series three in late 2013. PBS has to wait until after the BBC’s window. A PBS spokesperson says Sherlock will air either late 2013 — or early 2014.”

Though if you don’t want to blame Cumberbatch and Freeman you might want to look towards Peter Jackson. Was adding a third film to his Hobbit project what really caused the delay? Freeman is of course playing the lead role of Bilbo while Cumberbatch is playing both The Necromancer and Smaug and while they both have other jobs coming up, I’m sure additional Hobbit shoots are taking a chunk of their time.