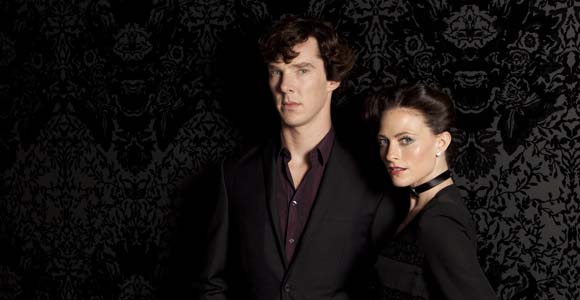 The classic character Irene Adler has recently been cast for CBS’s Elementary but will we see her return to BBC’s Sherlock? Hear what Lara Pulver has to say on the matter.

Pulver premiered as Adler in Season 2 of Sherlock but from all we’ve heard so far about Season 3, it doesn’t look like she’ll be returning (though I wouldn’t put it past them to sneak some texts in). What about Season 4 or 5?

“She’s definitely not dead, which is always a good start,” Pulver told Spinoff Online. “However, I have no doubt at some point Irene Adler will be back in that BBC show. It was such a wonderful piece of writing on Steven Moffat’s part, and it’s become a very kind of iconic relationship between Holmes and Adler. There’s definitely more to be explored, but it might not be in the immediate future.”

Not everyone was thrilled with how Adler was represented on Sherlock but I’d personally love to see more of the character. As to Elementary, Pulver thinks it has its own place but hasn’t seen the show.

“That’s the wonderful thing about Conan Doyle: It’s open for complete new interpretation,” she said. “I think that’s what Steven Moffat and Mark [Gatiss] were so wonderful at — making their world based on the Conan Doyle books. I’ve not seen Elementary in order to comment, but hopefully they’re putting their own spout on that show and I’m sure they’ll create, just like with the Sherlock Holmes movies, their own world and their own Irene Adler.”