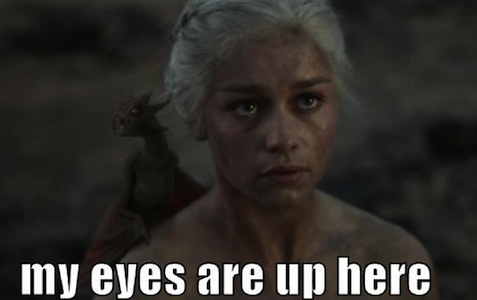 At first this conclusion seems like something of a no brainer, but Christopher J. Ferguson‘s study on the attitudes of men and women who have recently watched television with sexual violence in it has some very interesting results, as summarized by the Atlantic.

And no, the study participants did not watch Game of Thrones. Its just a convenient example of the intersection between powerful women and sex in television.

Ferguson’s study split 150 participants into three random groups: one group got to watch Masters of Horror and The Tudors (in which Henry VIII avails himself of many a never again mentioned concubine), one group got to watch Buffy the Vampire Slayer and Law & Order SVU (episodes featured sexual violence but also Buffy and detective Olivia Benson), and a third, the control, watched the more family friendly fare 7th Heaven and The Gilmore Girls. Afterwards, subjects were  quizzed on their attitudes towards women and their levels of depression and anxiety were evaluated.

But I found the rest of the results pretty fascinating. From The Atlantic:

Males who watched sexually violent shows with submissive female characters reported more negative attitudes about women than the control group. This effect did not occur for men who watched shows with powerful women. Women actually reported more negative attitudes after watching the G-rated shows, but how female characters were portrayed did not affect their beliefs.

Women who watched weak characters in sexually violent situations became twice as anxious as women who watched SVU or Buffy, who in turn actually reported less anxiety than the control group. The inverse occurred for men, who felt least anxious after watching The Tudors or Masters of Horror.

The idea that a powerful female character outweighs violence against women so much that women actually find those shows more reassuring than shows without violence at all is pretty amazing. The idea that the men in the study found shows with sexual violence against passive women to be the most comforting is less so. The participants were college students from a “southern university.” I’d love to know the particular politics on campus of the school, and whether they correlate with a rigid understanding of gender roles. I’d also love it if the sample size was bigger, but all in all, still an interesting demonstration.