I meant to go back and check these out, but... 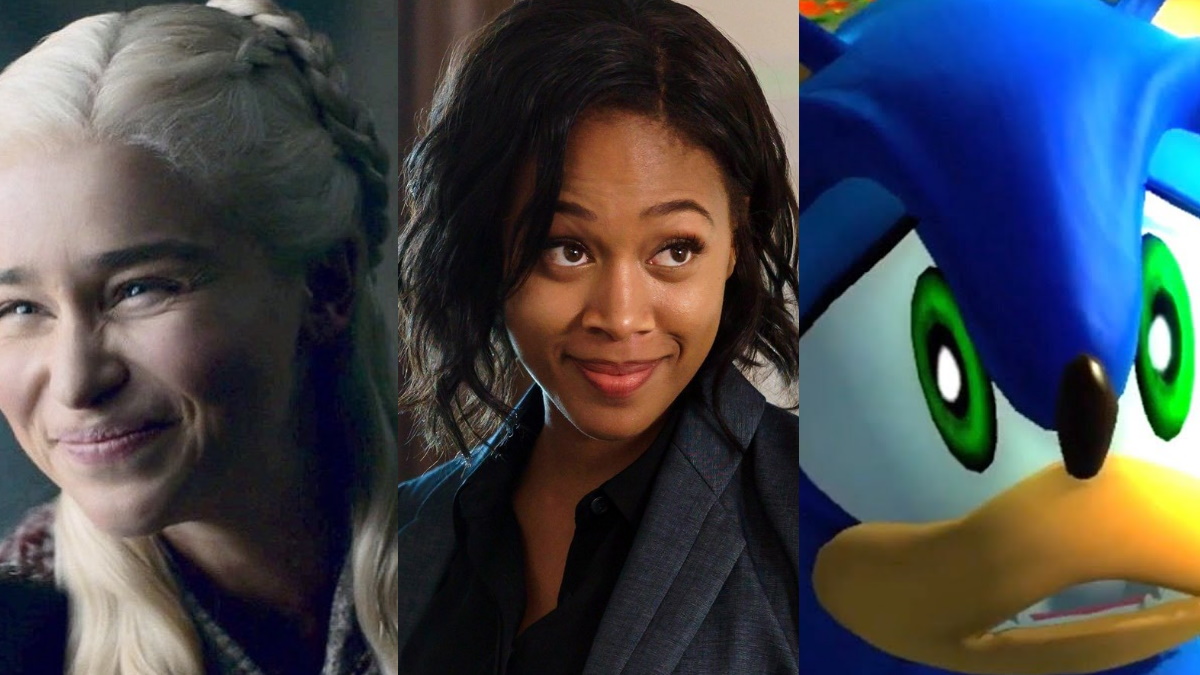 If you’re like me, then you have a habit of losing track of what series you’re trying to watch or the video game you’re trying to play. It’s not that you lose interest in it, it’s just that life happens, and suddenly, you’re 5 seasons behind.

When this happens I usually end up saying, “I’ll check it out when it’s over and watch the whole thing.” This method has worked in my favor for one of two reasons, 1) I don’t have to suffer through week-long cliffhangers and can get the next part of the story immediately, or 2) I dodge a major bullet by not investing time into a media franchise that dropped the ball.

whats a media yall can say you dodged the biggest bullet .. like listen shit may be rough but at least i was never into harry potter AMEN 🙏🏽

I’m sure this isn’t the first time this question has been asked, but it caught Twitter’s attention the other day as everyone mentioned media properties that they never got into—and were happy that they didn’t. From Homestuck to Hetalia, everyone had a particular series where they counted their blessings for NOT being a fan. That could be because of the show’s quality, the creator of the show tarnishing their own brand every time they tweet, or because the fandom associated with the series was a bit much.

So I thought I’d list a few of mine, based on media properties I had every intention of checking out until someone (or many someones) told my ass to turn the other way.

How much did I watch: A couple of episodes in the first season.

What made me stop watching: I ended up watching something else and, honestly? I can’t remember what it was. But suddenly? I was seasons behind, missing The Red Wedding and everything else my friends were frantically tweeting about, so I said, “I’ll wait until it’s over.”

What made me not go back: The fact that the entire WORLD collectively came together to tell everyone to NOT watch the last season, so much so that it felt like watching ANY Game of Thrones was pointless. It reminded me of how I felt with How I Met Your Mother (which I DID watch until the end) and how the ending ruined the entire series for me at the time.

I feel like that’s what the end of Game of Thrones did, according to a lot of people, so I didn’t bother to dive back in.

I did, however, watch a LOT of video essays about it.

How much did I watch: Four seasons.

What made me stop watching: Honestly? I lost interest in it. Once upon a time, I was binging this series with my wife. At some point, I wanna say after season 5 or so, I would hear people talk about how the series wasn’t as good as it used to be and how it actually could’ve ended at season 5. My wife made it to the beginning of season 11 before she stopped, and when I asked if I should try the show again she told me that five seasons was enough if I ever wanted to revisit it.

What made me not go back: Everything I already said plus the way the whole thing ended. It just… did not sound good. At all. But honestly, Supernatural felt like it had reached a point when I would ask fans about it and they would straight up tell me it wasn’t good, that they were just sticking around to see how the whole thing ended, how certain seasons were garbage but things were back to form by, like, season 12? I’m guessing at the number here, but it felt like the ones watching were determined to push through, and when it was over no one was happy.

How much did I watch: NONE!

What made me not give it a shot: Every time, and I mean, EVERY TIME I would mention Riverdale, a fan of the series would say, “Oh, it’s trash.”

Then they would explain some of the plot threads to me and I just… slowly backed away.

That’s not to say I don’t enjoy my fair share of trash TV, but listening to fans try and explain Riverdale (Rivervale?) was enough to get me to pass on the series. That, and it feels like those endearing “it’s trash” comments are turning into genuine bouts of exhaustion about the direction the series is going in.

How much did I watch: One season.

What made me stop watching: Honestly? I don’t know what did because I really liked the first season.

What made me not go back: You could probably make this argument with a lot of CW shows, but I feel like some of these series end up reaching a point where fans begin running out of fuel with them. They run their course, as they say, which is something that television just does, but instead of ending at a good spot, the CW announces even more seasons, leaving fans to wonder… why?

Major cast members have left The Flash at this point, and as our Princess Weekes wrote, it wasn’t all that surprising. Currently, the show is in the middle of its eighth season, and I feel like fans would be fine if it ended there. Will it, though? I dunno, but when I look into the series it doesn’t sound like one I need to watch in its entirety (kinda like Arrow, which I remember watching pretty late and getting responses of LOL GOOD LUCK – I made it four seasons before I stopped).

How much did I watch: Somehow? Not a single episode!

What made me not give it a shot: I kept meaning to! I just never got around to watching it, and then the series felt SO HUGE and I didn’t have the time to invest in it.

Then, all of the sudden, everyone got to the end of the series and there were so many wild discussions on whether or not everyone was dead that I breathed a sigh of relief about not being a part of the discourse.

How much did I watch: Most of season one.

What made me stop watching: Like a lot of things on this list, I just didn’t have the time to get back into it, but I really liked what I watched.

What made me not go back: Oh boy, where to begin with this?

Have you ever had a series where the fandom discourse overtakes the series itself? That’s what Voltron was, so much so that I still, to this day, can’t figure out if people liked the series or not.

I think they did? Maybe? But not the finale?

And among some very valid conversations about queer representation, there were hostile fans who went so far as to threaten the cast and crew, which then became the main thing you’d hear about when referencing the series. It stopped being about Voltron and representation and became, “Shippers are out of control.”

It felt like a chore to even dip your toe in Voltron and, honestly, it still does.

How much did I watch: Several episodes of the first season.

What made me stop watching: I got busy and stopped being able to watch this weekly, which I was kinda miffed about because I really wanted to watch more. I adored Abbie, but then…

What made me not go back: Oof. Talk about a series that fumbled the bag. This was one of those cases where a fandom was so angered by a show’s treatment of its main character that I felt that anger, too, even if I hadn’t gotten as far into the series as everyone else had. You know it’s a bad sign when your fandom celebrates your inevitable cancelation.

The fact that the Black female lead got done so dirty never sat right in my soul.

How much did I watch: One season.

What made me stop watching: I binged the first season and there weren’t any more episodes at the time and I thought, “Well that was an entertaining zombie series, I’m satisfied with what I got.” Eventually, a new season was announced, but I’d binged the first season with a friend and didn’t have the network it was airing on so I just… never watched the rest.

What made me not go back: Soon the series would be available on streaming platforms I had, though it would be a season behind. That didn’t bother me. However, I never really heard anything from fans that made me wanna watch anything after the first season, and characters I did like, well, died, and fans kinda made it sound like there wasn’t a point. Everyone I knew who had kept watching the series either stopped because they got tired of it, or they were trudging along to “see how it all ends” but didn’t look happy about it.

How much did I play: Approximately ZERO hours and ZERO minutes.

Something similar happened with Duke Nukem Forever, where a coworker came in and said, “Cancel your reserve.” Fortunately, I listened.

How much did I play: Just the demo for Sonic 06 (thank god) and NONE of Sonic Boom

What made me not play either of these games: I feel like I could place a laugh track here and that would suffice, but if you must know, I tried the demo of Sonic 06 way back when and the controls were so bad that I gave up on it. When the game was released, I heard that it was an utter disaster, from the story to the outrageous load times, and, as I mentioned with the demo, the controls.

The music, however, is a gem.

Unfortunately, Sonic Boom doesn’t even have that going for it, as pure word of mouth revealed that along with such “memorable” moments as the Knuckles Jump Glitch, the insta-death in water, the dull environments, and the monotonous gameplay.

I watched a Let’s Play of Sonic Boom instead.

Honestly, I’ve had fairly good luck with anime. I think it might be because anime fans work pretty fast to let you know if a series is trash. If something like, say, Black Butler (season 2) strays from the manga in an abysmal way, fans will let you know.

It helps that you can just go read the manga, in most cases, if the anime does something that you don’t like.

On the flip side, you have series like The Promised Neverland (season 2) where you push through because, surely, they’re gonna follow the manga plot that everyone’s been excited about.

The only series I can think of where I dodged a bullet is Tokyo Ghoul. I watched the first season and loved it, but according to fans, everything after that was… not great, so I never watched the next part of the story.

What are some media properties that you’re glad you never interacted with? More importantly, what series did your friends take the hit on, leading you to look the other way?