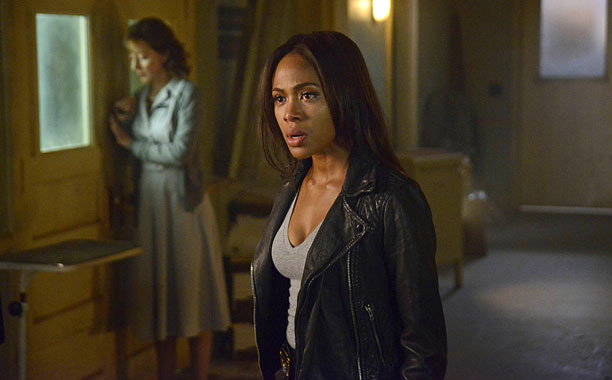 “Ichabod, everything we’re striving for here, fighting with our dying breath to create for this country a free land of opportunity for all Miss Abigail Mills represents. She is the American dream.”—Benjamin Franklin 2×18: Tempus Fugit

If someone had told me that in 2016 Bonnie Bennett would be practically leading The Vampire Diaries and Abbie Mills would be dead on Sleepy Hollow, I would have called them a liar. Abbie was safe—she was the main character on a FOX show with a huge cult following!—and despite the writing failures, there was no denying that Abbie was important to the show. Then she was killed off, and I was forced to realize that there was no safety.

Throughout science fiction and fantasy there have been female characters of color, but many have been either hated (Doctor Who’s Martha Jones), sidelined (BBC Merlin’s Gwen), or just never allowed to real their full potential (Teen Wolf’s Kira Yukimura). There are others that exist, but on smaller shows on cable television: Z Nation, Hunters, Dark Matter, and Killjoys, to name a few. Sleepy Hollow held the hopes of a huge population of black fans who were looking for a place on a major network in genre television.

The announcement of Nicole Beharie as the lead actress of Sleepy Hollow was exciting, but I remember that year was also the year Elementary came out and there was a lot of joy about seeing more women of color leading a show that wasn’t written by Shonda Rhimes (she can’t do everything y’all). In season one, despite a few pitfalls, the show really balanced out its core cast and the intense chemistry between Ichabod and Abbie (Ichabbie) is probably one of the best I’ve ever seen. Not only was there Abbie, but she had a sister, Jenny; and Frank Irving was a black male character in power who was kind, wise and had a family of his own. We had multiple layered POC and it was excellent.

Then in season two, they began to bring the foolishness.

Abbie, Jenny, and Frank took a back seat to the Crane Family Viewing Hour and we were treated to the angst of Ichabod’s relationships with his wife Katrina and evil son-demon, Jeremy aka Henry aka Horseman of War. Slowly but surely Abbie’s narrative dwindled into a single episode that was totally centered around her, “Mama,” and while we were shown a tiny sliver of what the show could be, it returned to assuming that the only way it would prosper is by Crane leading the path. Even though people kept talking about how important Abbie was to the show.

People were screaming for more Abbie at the end of season two and not just screen time, we wanted Abbie to have a life. Despite living in Sleepy Hollow her whole life Abbie had not one friend to go to. With the exception of her sister, Jenny, Abbie was denied having real outside relationships with anybody throughout her run. That was despite the immense thirst coming from: Hawley aka Worst, Andy aka Cho-tastic, Random Angel Guy who never came back, Hot Camera Guy who never came back, and Ichabod Crane himself. Meanwhile not only did Ichabod have his relationships at the very forefront of the show, he was allowed to have friendships and his random knowledge almost always led to the resolution of the story’s main mystery.

But, like a thirsty man in the desert, fans hoped beyond hope that season three would be different. With Katrina dead and Hawley gone it was time for Abbie (and Jenny) to get their screen time back. Then everything changed when Betsy Ross appeared.

Betsy Ross will go down, in my humble opinion, as one of the stupidest things this show did. For a show that was celebrated in season one for its diversity, it continued to peel back its characters of color and add the most irrelevant white characters they could dust up. Betsy Ross was the cream of the crop, second only to Hawley, in being a huge waste of time. Plus, guess who got a relationship story again? Oh that’s right: Ichabod. One in the past with Betsy, and one in present day with a colonial history-buff Zoe.

What was Abbie’s storyline? Well, she got sucked into a tree once. After being brought back into reality with help from Ichabod, Abbie did have a fairly good storyline dealing with her PTSD from being in a world devoid of time, but even that in the larger picture was too little too late. Even her eventual relationship with Daniel, her boss and former flame, got very little development and the timeline itself is wonky at best.

Then after all that, she died since she “served her purpose” by helping Ichabod. Excuse me while I go scream into my pillow.

Abbie’s death isn’t upsetting just because she died, but because the show really thinks it can survive without her. The actress wanted to leave, and rightly so, considering the material she was getting, but that is the problem—the story made her want to leave. Sleepy Hollow, whether it wants to admit it or not, got its fanbase because of diversity and because of viewers who enjoyed seeing Abbie Mills as the lead characters. There are people who, despite the poor second season, still stuck with the show because they wanted to see Nicole as Abbie Mills.

Let us not forget that during the Civil Rights movement, Martin Luther King Jr. asked actress Nichelle Nichols to stay on Star Trek because of what her image meant to black female viewers. The sad reality is that hunger, that need to see ourselves, still exists in media and with every step forward, there are several steps back that only reinforce the need to see the few that do it well survive.

As a black woman I don’t just want Empire and Black-ish. We don’t want television that people assume is just “for us,” we want to be a part of stories that people have assumed we have no place in.

Abbie Mills was supposed to be our Buffy, our Scully. Not because black women or other women of color don’t enjoy those characters, but it means something to see a woman who is brown and beautiful and smart be on screen, being called “The American Dream” in a world that constantly questions your humanity. Abbie Mills held in her the hopes and possibilities of what a dark skinned black woman could be on a network sci-fi show. And it failed.

Sleepy Hollow reinforced the expendability that black bodies are in genre television, and proved that protagonist protection does not extend to us. As I watch shows like Elementary, Wynonna Earp, Killjoys, and Z Nation that have non-white characters as “leads,” I fear for their safety constantly.

We are not safe. Not in this world or others. I mourn Abbie Mills and as I look at my old television flame, The Vampire Diaries, I just keep hoping that Bonnie Bennett will make it out alive because I need someone to.

Princess Weekes is a full-time writer, part-time Barista originally from Brooklyn, but camping out in Queens, NY. When she isn’t catching up on Netflix or stressing about student loans, she reads about dead white royality. She runs a small YouTube Channel under the username Melina Pendulum and hopes to someday finish that novel. Find her on Twitter orYoutube.