No Sympathy for the Devil: F**k Serena Joy 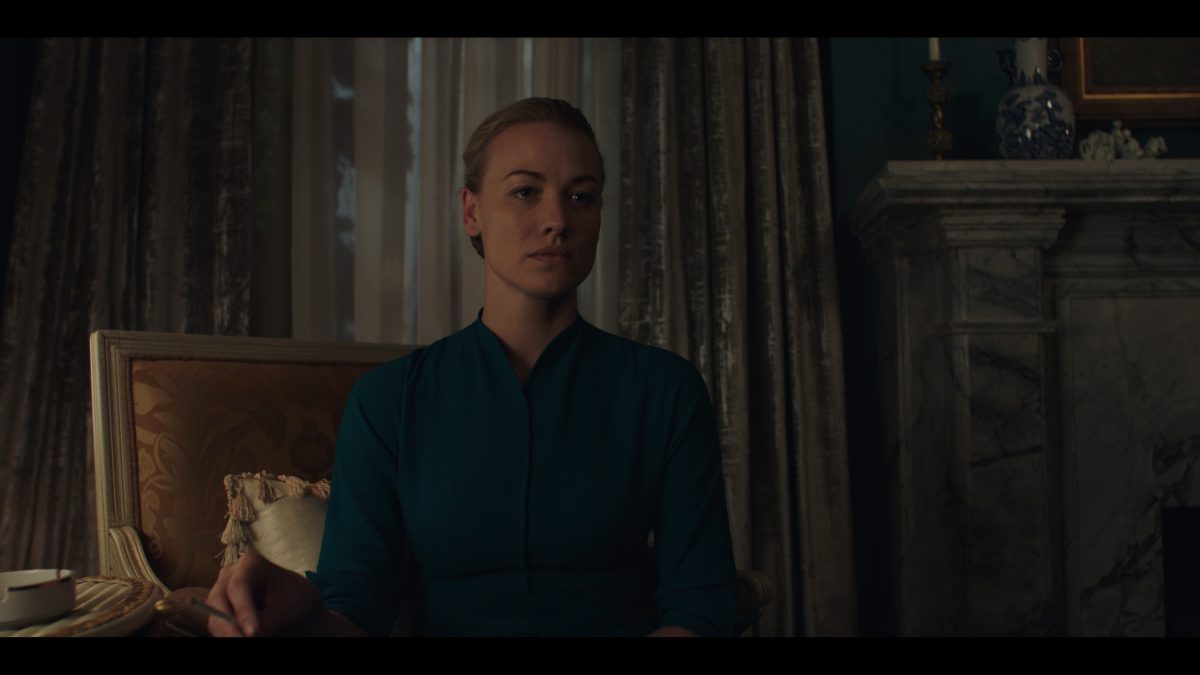 ***Spoilers for the Season Two Finale of The Handmaid’s Tale***

Throughout the second season, there have been attempts made to make Serena Joy a sympathetic character. At first, it seemed like maybe they were just trying to give her depth as she works with June to further subjugate other women by maintaining “order” while Fred is away, only to get beaten for her troubles. Then in recent episodes, following the execution of Eden, Serena seems to have another meaningless moment of doubt about her totalitarian patriarchal government system.

When June comes to Serena with Eden’s Bible filled with marginalia, it emboldens Serena to seek out the other Wives who may have doubts about the fact that they aren’t allowed to read or write, and what that means for their daughters. Serena and the Wives plead their case and Serena makes the gambit of pulling out the Bible and reading a passage from it. Some of the other wives leave, but Serena feels confident about what she did. Until Fred has her dragged away to have her pinky finger removed above the knuckle.

June then sits down on the bed and holds Serena’s hand in white lady solidarity. My reaction to this scene:

Say what you will about Cersei Lannister, but at least her internalized misogyny comes from growing up in a world where she was treated like a broodmare and unable to inherit anything because of her gender and resents women because of that. Serena Joy allowed her desire to have children to literally remove her ability to read and write, when she used to be a published author.

Fred may be “worse” because he’s an unrepentant rapist and is dripping in so much incompetency that you realize the only reason he has his position is that he’s a man. But in my eyes, Serena has always been the worst because she plays into all of these terrible things right until the moment it affects her life. Then she’s softly crying into her azure blue capes like Blue Diamond.  It takes having a daughter, watching Eden die, and realizing that Eden’s father turned his own daughter in for execution to make Serena understand what she has helped reap. And it is too little, too late.

Even as she tearfully gives Nichole away, I did not care. Good. Send that baby away. You shouldn’t be raising a child when you had no problem living in a society that condones rape.

Fellow TMSer Chelsea wrote a piece about how Serena Joy helps explain the women who voted for Trump and Kate wrote another piece about the women complicit in Gilead’s evil deeds. For me, as a black viewer of this show, I didn’t need Trump or this modern era of white feminism to explain these women’s cruelty to me. I have a historical context for that: Antebellum Slavery.

During the slave trade, women who could have children were viewed as, in the words of Thomas Jefferson: “a woman who brings a child every two years [was] more profitable than the best man of the farm.”

At auctions, a woman’s reproductive abilities could be “assessed” by looking at her genitals and examining her breastfeeding abilities (264). This clearly shows that the domestic slave trade placed value on slave women in accordance with their ability to reproduce. […] By defining and controlling a woman’s sexuality through punishments, be it not getting married or a sale, and by confining women’s sexuality to the notion of reproduction and motherhood, the domestic slave trade confined women to traditional spheres while asserting the white men’s, or the controllers’ dominance over them. (via Armstrong Undergraduate Journal of History)

In Laura F. Edwards’  Scarlett Doesn’t Live Here Anymore: Southern Women in the Civil War Era, Edwards talks about the reality of  planter-class women in the antebellum period who possessed “the privileges that gave them power as members of the white, planter class also defined their subordination as women.” They, therefore, prepared for being subordinate to men and worked to fulfill their roles as wives, mothers, and mistresses over the house slaves.  During the war, planter class women were great supports of secession because they “had more invested in the cause than other southerners did.” They saw duty, honor, and liberty were the “cornerstones that grounded . . . position and power in the southern social structure.”

Of course, during the war, everything went to shit because guess what being raised to be dependent doesn’t come in handy when you need to be in charge.

Serena Joy comes from this ilk. Willing to allow other women to be beasts of burden, but then shocked when realizing that she has created a society where men do not value their daughters. They don’t value their thoughts, their desires, their freedoms and their education. Fred punishes Serena Joy to “set an example” for baby Nichole: obey or suffer.

What makes it all the worse is our avatar for this world, June, possessing this weird sense of pity and solidarity for Serena. So much so that she asks Emily to keep Serena’s baby name, Nichole, rather than the name June picked, Holly (her mother’s name). Sis, for what? This woman held you down and made her husband rape you so that you’d give birth. Serena Joy is a monster, and while I take no joy in seeing her become a victim of her husband’s abuse, I’m not shedding a tear. Because if she had even the tiniest bit of empathy, she wouldn’t have been here in the first place.

So fuck you Serena Joy, sorry you have buyer’s remorse about living under his thumb.

All this to say: watch Harlots instead.