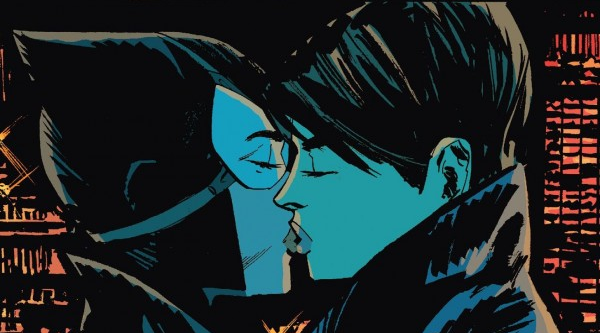 Catwoman #39 was released yesterday and confirmed what many fans have guessed over the years about everyone’s favorite cat burglar.

For those who haven’t been following the book, since issue 35 Selina has been heading the Calabrese crime family. Her mission is to help Gotham find some stability in the chaos of not just the general rogues gallery violence common to the city, but also the larger events of Batman Eternal. The arc has been really stellar, bringing a lot of nuance to the character and to the politics of the Gotham crime world. As a result of her new role as boss, Selina has put away the Catwoman persona (for now), but someone else has decided to take her place. The new Catwoman was eventually revealed to be Eiko Hasigaway, the daughter of the head of the Yakuza crime family.

Eiko doesn’t approve of all of Selina’s methods or choices — she’s younger than Selina and perhaps a bit idealistic in what she feels Gotham needs — but eventually they see each other as allies and have grown closer over the course of the story arc. Selina cares about her.

In issue 39, tensions are high as Selina was nearly murdered and she doesn’t know how much Eiko’s family was involved. Eiko warns Selina that the other families, including Eiko’s father, will be declaring full out war on the Calabreses. She begs Selina to be careful. Then Selina pulls Eiko close and kisses her.

Yesterday on her twitter account and this morning on her blog, Catwoman writer Genevieve Valentine confirmed that yes, it is canon. Selina Kyle is bisexual.

So, trying to avoid some CATWOMAN #39 spoilers (just for today), but if you have any questions, the answer is: Yes, it's canon.

To be honest, while articles have certainly been published in the last day or so about this huge development, I’m actually surprised it didn’t explode over the fandom landscape yesterday. Part of me wonders if we’re just used to Selina being badly written as hypersexual. Even for those who read the comic itself, until Valentine had said Selina’s bisexuality was canon, her kissing another woman could have easily been something for shock value and then swept under the rug. 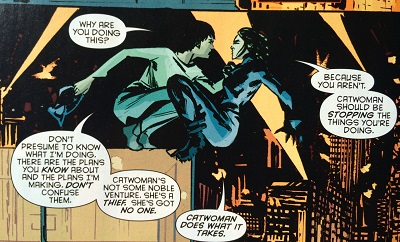 So why is it so important? For one, the immediate confirmation of a character’s queerness from the writer is crucial. Pop culture media likes the idea of two women kissing, either as straight male fantasy or queerbaiting or both, but is more hesitant to go on record and say that female characters aren’t straight. There was no explaining away the kiss here as a mistake or mind control or a misunderstanding. No, it was a moment between two women who have a strong connection well beyond the platonic. Genevieve Valentine isn’t playing around here.

For another, it’s huge that it’s Selina Kyle in particular. Catwoman is iconic. Whether it’s from the 60s television show or Batman Returns or Batman: The Animated Series, pretty much everyone knows about Catwoman in some form or another (although her alter ego wasn’t Selina Kyle in the 60s show, but that’s semantics). No offense to Alan Scott fans, but if he was going to be the most well-known DC hero to come out as gay in the 2010s (in an alternate universe, no less), then you get why people weren’t convinced of DC’s commitment to representation. To have this kind of high profile pop culture icon come out as bi in their own book, in the main continuity, is big.

And you know, it’s not just Selina’s sexuality that’s been confirmed here. In Eiko we have a queer woman of color as Catwoman. Also huge.

The biggest thing for me is not that this moment happened in the books, but what will happen next. I wrote about the Legend of Korra finale back in December and for the most part my feelings have stayed the same — I still feel that how the show ended and Bryke’s comments that Korrasami is absolutely canon was huge and a step forward for queer representation, but I wanted it to be more explicit in the actual episode and dang it, I wanted to see what happened next (fingers crossed for that Korra comic, everyone).

But with Catwoman, we don’t have to worry. In that blog post, Valentine confirmed the move “isn’t a throwaway; as soon as my renewal as the ongoing Catwoman writer was confirmed (early enough in the scripting process to give the major relationships some breathing room across arcs), I was able to start work on a thread for them that would be woven into the next arc.” 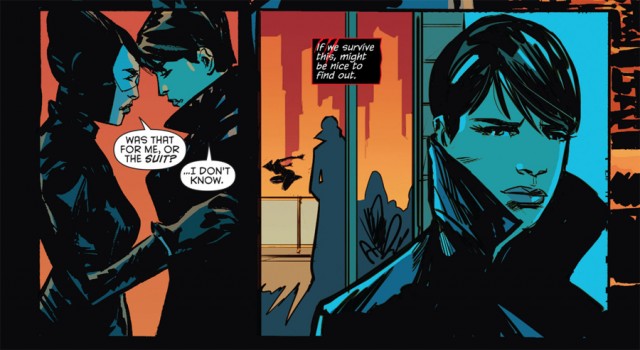 We’re going to get to see a romantic relationship between Selina and Eiko not just as part of the comic, but an integral part of Selina’s story and her struggles to bring Gotham stability. This revelation in #39 isn’t an end of a story, but in many ways a beginning. Now, Valentine does warn in that blog post there’s a chance it could all go to hell for the two of them because this is comics we’re talking about; the story being told is full of high stakes and Eiko is still the daughter of another mob boss who isn’t too happy with Selina right now. Heartbreak could happen. However, Valentine has confirmed, “it will be a relationship,” and it’s so important that the book show not just two women attracted to each other but their relationship as more than just a heated kiss.

Am I naive to think DC Comics is going in the right direction? After all, there hasn’t been an official announcement yet for a new Batwoman book (although there have been rumors that it’ll be announced during or after the Convergence event) and the large majority of LGBTQ characters in DC books are side characters who only pop in here and there but aren’t the main heroes of the stories. But here we have this great Selina Kyle story where she’s not only being beautifully written as a competent, complex leader but also as a woman falling in love with another woman. I think that’s something to celebrate.

Now if we can confirm Starfire as pansexual, that would be amazing.

Katie Schenkel (@JustPlainTweets) is a copywriter by day, pop culture writer by night. Her loves include cartoons, superheroes, feminism, and any combination of the three. Besides The Mary Sue, her work can be found on Panels,  CliqueClack, and her own website Just Plain Something, where she hosts the JPS podcast and her webseries Driving Home the Movie. She’s also a frequent TMS commenter as JustPlainSomething.