7,000 Pound Lollipop Proves Hard to Fit in the Side of Your Mouth 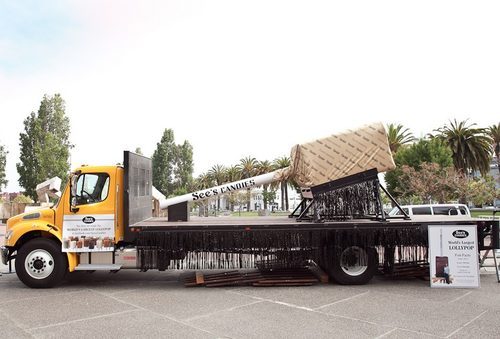 Here at Geekosystem, we love big candy, but there aren’t many sugary treats that top this world record breaking sucker cooked up by See’s Candies. This is not a lollipop to be trifled with. I would love to see its calorie count! Read on for more about this marvel of human candy-neering.

As we all know, July 20 is National Lollipop Day. What? You didn’t know? Well it is! See’s Candies, a company based in Burlingame, CA, celebrated by erecting a 7,000 lb version of one of their signature “Gourmet Lollypops” in Justin Herman Plaza in San Francisco. See’s ousted Ashrita Furman, Guinness World Record Holder, for the world’s largest lollipop. Furman’s sucker weighed in at a measly 6,514 pounds and held the record from 2009 until last Friday. The Guinness World Records’ official website gives this information about the See’s lollipop:

The lollipop was chocolate-flavored and had the following measurements: 4 feet 8.75 inches in length, 3 feet 6 inches in width, and 5 feet 11 inches in height. The lollipop also included a stick which was 11 feet 10 inches tall, though the weight of the stick did not count towards the record.

That really is one helluva sucker.