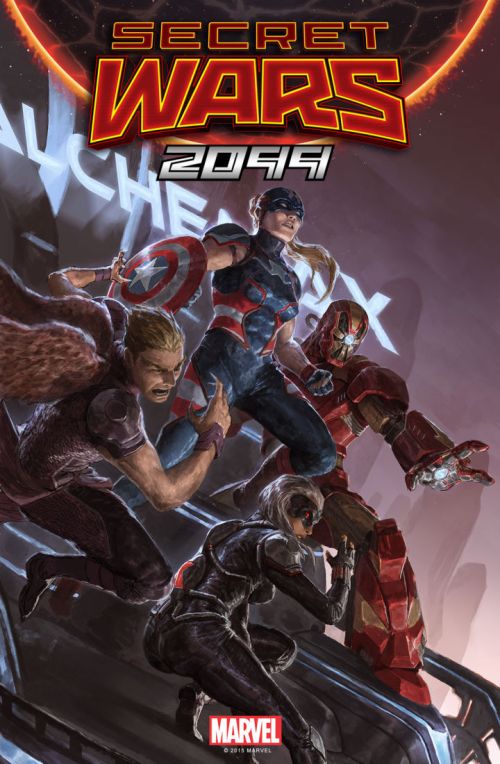 He’s literally a Hawk Guy! Get it? Get… oh right, okay, burying the lead here.

We might not be overly enthused with the world-colliding Secret Wars storyline that Marvel’s got cooking for this summer, which will pit the original Marvel universe (Earth-616) against the Ultimates (Earth-1610) in a battle for who gets to keep Miles Morales (okay, not really, but let’s be real, that’s the character everybody wants to make it out alive with his own MCU movie deal). But you’ve got to admit, the newly announced Secret War 2099 looks pretty flippin’ rad.

Some background: the 2099 universe—AKA Earth-928— first originated in a 1992 issue of Amazing Spider-Man and then spawned off (pun intended!) into Spider 2099, in which Miguel O’Hara takes on the mantle of Spider-Man in the year 2099 to defeat the evil corporation Alchemax. Other cyperpunk-style legacy characters then added such as The Punisher, The Hulk, Ghost Rider, Doctor Doom, and many others. The original Captain America was once even “brought back” for a short time, having once again been accidentally cryogenically frozen—well, except not really because he was a clone. Oh, but then they found the real guy and he became Thor for a while. Comics, am I right?

Anyway, in 2014 Marvel announced a new ongoing title for Spider 2099  by Peter David and Will Sliney, and while that comic is now ending, the same creative team has joined up for Secret War 2099. It’s unclear whether this will be a limited or ongoing series, but David is on record as saying that it’ll have little to do with the rest of Secret War other than its Battleworld setting, and that new readers will have no trouble getting acclimated to the alternate timeline and characters.

We also don’t know anything about this new team of Avengers other than their superhero designations and that they’ll apparently be working for Alchemax. However, if Sliney’s character designs are any indication of what to expect, this might be a really interesting and diverse title. For example, here is Captain America: 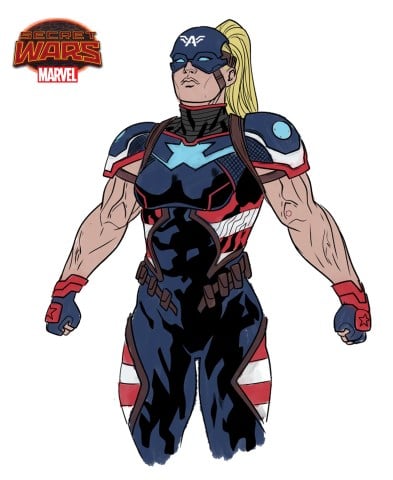 And here we have Iron Man, who appears to be a little person. Given that I can count the number of comic superheroes with some form of dwarfism on one hand (and no, Tyrion Lannister doesn’t count), that is pretty cool: Next, Hawkeye and Black Widow: Is it just me or does Hawkeye look kind of like a Dragon Age Inquisitor but with wings?

When everything ends, it’s time to go back to the future. Revisit the world of 2099 and see it a whole new light, as characters who have never been seen before make their first appearances – including the AVENGERS 2099. Can the ideal of Earth’s Mightiest Heroes survive in a world where megacorporations rule with an iron fist?

What do you think? Will you give this a shot when it comes out in May?