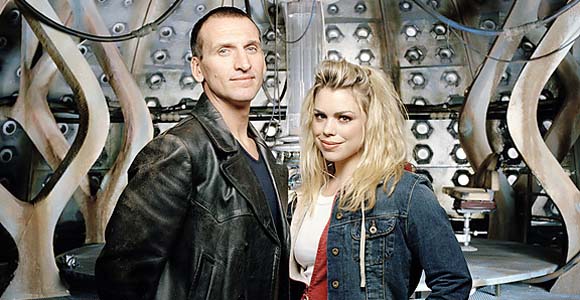 We all knew it wasn’t going to happen but Steven Moffat had plans for Christopher Eccleston to take part in Doctor Who’s 50th anniversary anyway. Just in case.

I was pretty happy with “The Day of the Doctor.” One thing which would have made it better? Eccleston. There was that point in the special where I thought they’d done it, they’d misdirected, lied, and pulled a giant wool sweater over our heads for months in an effort to keep Eccleston’s inclusion a secret. The regenerations scene, of course. And while you can kind of see the actor’s eye for a split second, the actor himself decided against appearing in the anniversary special. But in case he did say yes, Moffat was ready.

Doctor Who TV reports on a recent interview the showrunner did with Doctor Who Magazine. Moffat told them yes, Eccleston would have been John Hurt’s character, “but I was pretty certain Chris wouldn’t do it, although he did agree to a couple of meetings. So instead we had the challenge and excitement of introducing a BBC audience to a brand new Doctor.” He also confirmed it would have been Eccleston’s Doctor ending the Time War but that it would have caused a few story issues:

“[Eccleston] is a brand new Doctor in Rose, he’s absolutely, definitely new. It couldn’t have been is who pushed the button in the Time War, cos that’s a new man, very explicitly, in that episode. I also had trouble, I have to be honest, imagining it being Paul McGann’s Doctor.

“So all of this led me to the idea that if you’re going to sell to the Not-We audience a Doctor who essentially they haven’t seen before, then you have a freer hand than saying it has to be one of the ones you’ve already had. And it was predicated in getting an enormous star to be able to do it. We got John Hurt, so that was cool! Think of the fuss it’s created for us!”

Don’t forget, Eccleston has joked about participating in the 100th anniversary. Did you miss his presence like I did in the 50th anniversary?