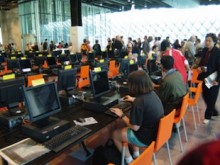 It started when Julie Howe, at the library with her children, saw a library partron watching a little “hard-core pornography.” Howe asked him to at least move to a slightly more discreet location, but the patron refused and when Howe tried to get a librarian involved, the librarian refused as well. The library at large has stood by that librarian’s decision telling SeattlePI:

“We’re a library, so we facilitate access to constitutionally protected information. We don’t tell people what they can view and check out. Filters compromise freedom of speech protected by the First Amendment. We’re not in the business of censoring information.”

It’s worth noting that they aren’t bound to this stance. Washington State Supreme Court has actually given libraries limited and understandable filtering rights. In a 2010 decision, the court ruled that libraries have historically had some amount of control as to what they carried in their collection, and that ought to be extended to the Internet. This isn’t an order though, and Lake City library doesn’t believe in filtering, period.

The weirdest part is probably how levelheaded Howe seems to have been about the whole thing. “The man’s right to access constitutionally protected information is fully protected (which I’m not in argument with),” she said in a post on Lake City Live, a neighborhood blog, “but our right not to be inadvertent viewers is not.” A very salient and well articulated point indeed. That being said, nothing has been done to address Howe’s point so far, so you just have to watch your kids in the Lake City library if you don’t want them accidentally stumbling into some pornography.

“But what I find ironic is that you can’t talk too loudly at the Seattle Public Libraries or you’ll be asked to keep it down so as not to distract the other patrons. You know, the patrons viewing pornography.”

It could always be worse though, at least they’re being quiet.