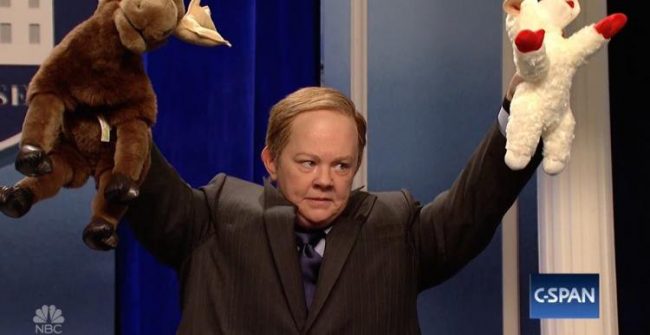 Over the last five months (sweet Christmas, how has it only been five months?), Sean Spicer and the rest of the White House team have made a number of attempts to get around that whole pesky “free & independent press” thing. They’ve tried having closed-door, invitation-only briefings (that didn’t go over well), they’ve tried hiding in bushes (ditto), and now they’ve banned cameras from the White House press briefings.

So CNN did the only reasonable thing: they brought in their courtroom sketch artist to cover the briefing.

The White House has been prohibiting cameras at some press briefings, so we sent a sketch artist https://t.co/FuKv8RjYD2 pic.twitter.com/pCPzMZas5G

This not only highlights the absurdity of the Trump administration’s efforts to avoid accountability and keep the press from reporting all the “alternative facts” that come out of these briefings, but it allows CNN’s Jim Acosta to make a Grade-A Dad Pun.

So sketchy to not have cameras at WH briefing. So CNN sent sketch artist to capture the moment. pic.twitter.com/tNAoDHkozj

Others were having just as much fun.

was not a supporter of the idea of a courtroom sketch artist in the white house briefing room but this is pretty good tbh pic.twitter.com/XHeVrhkZN3

“how was the press conference”
“fine” pic.twitter.com/xnvRwbdSIc

FOX News brought a sketch artist to the press briefings too. pic.twitter.com/bqSAklT8ic

Others, though, weren’t feeling the jokes. Because while we do need to be able to point out the absurdity of the Trump administration, the degree to which the White House is fighting to restrict journalists’ access to the office of the President is not normal, and not democratic. It’s a legitimate threat to the First Amendment, and cheeky jabs aside, the press needs to put up a fight.

Dear @CNN, I don’t want to see drawings by your sketch artist. I want to see you refuse to turn off your cameras when ordered by Trump & Co.

Because the sketch is a cute visual and makes for good headlines, but it can’t get across the buckets of misinformation Spicer spewed out up at that podium.

I know people are getting desensitized to Spicer lying, but this is one of the biggest lies the Trump White House has ever told. pic.twitter.com/uF1BaEs2KK