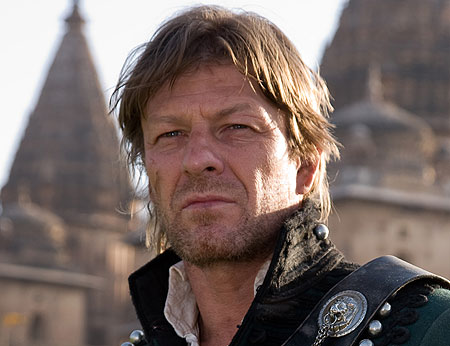 Professional Dying Actor Sean Bean has been cast in Tarsem Singh‘s Snow White movie, which is getting more and more interesting-sounding despite not having a title yet, even about a month into shooting. He is set to play the father of Snow White, who will be played by Lilly Collins (daughter of Phil), and the husband of her evil stepmother, who will be played by Julia Roberts. But what we want to know is what kind of gruesome death will greet Mr. Bean in this movie? Does Snow White’s father generally die in Snow White? Because he probably will this time. Fate wills it so.

The role of Snow White’s father is not a huge one in the original Grimm’s fairy tale. According to Screen Rant, however, this “spirited adventure comedy filled with jealousy, romance, and betrayal” will not be a direct adaptation. Basically, he is a king who loses his wife soon after she gives birth to their daughter, then takes a new wife in the form of the incredibly vain and totally insecure stepmother, who has a mirror that she is constantly asking for validation on her looks. I’d like to say that since she is the type of woman who ordered a hunstman to take Snow White out into the woods to stab her to death and bring back her lungs and liver as proof — and then eat them for dinner — that the Sean Bean Epic Death Scene Odds could be considered fairly high in this case. Especially since Screen Rant describes his role as that of a “soon-to-be-ex-husband” who “won’t be in the greatest of health by the end of the film.” There is also the chance that he could quietly pass away from a disease or heartbreak or something after Snow White goes missing, leaving the Queen to go nuts on her stepdaughter without her dad getting all upset about it. But there is absolutely zero Sean Bean Epic Death Scene Fun in that, is there?

So let’s bet on another insanely gory Sean Bean death.

Also fun to think about: Will Armie Hammer, who is playing Prince Charming, also be the subject of the Wicked Queen’s wrath? Who else will die in this movie? Guys, this movie could be insane. Maybe Sean Bean could even die multiple deaths. It’s a fairy tale! Anything can happen!