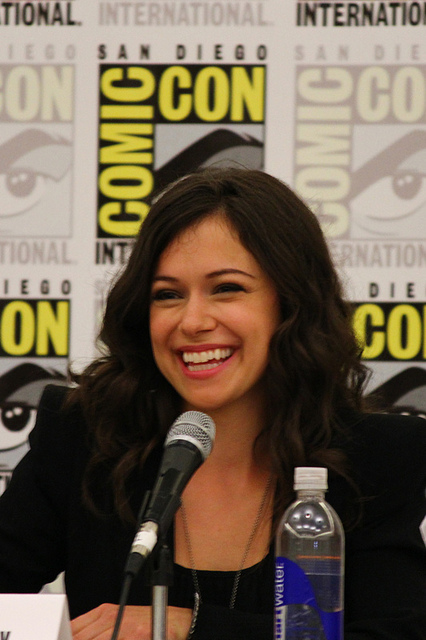 Hall H was bursting to the brim with awesome yesterday. A roster of rock stars including Natalie Dormer, Maisie Williams, Katey Sagal, Tatiana Maslany, Sarah Paulson and Nicole Beharie all gathered for SDCC’s annual Women Who Kick Ass Panel to discuss powerful characters and the challenges of their male-dominated field.

Dormer, in a perfect example of her own ass-kickery, spoke out against archaic female archetypes:

The best female roles are in television at the moment. Katniss Everdeen — as popular as she is — is an anomaly. She really is.
Where television is fantastic — and is way ahead of film — is it doesn’t feel the need to polarize women so much… Male writers — and I say this with all love and respect — often want to make a woman either the angel or the whore, make her the witch, or put her on the pedestal. When people ask me about Margaery, I say they’re not mutually exclusive. You don’t have to be practical and politically savvy and not be a good person. You can be a good human being and just be shrewd.

The Game of Thrones actress praised the series for depicting “all the different ways you can wield power,” a theme that hopefully won’t be compromised for its female characters in spite of creative change-ups for Season 5. Maslany also touched on the tendency for women to be pigeonholed and the consequent difficulty of embracing success:

A lot of different men will come on as day players or guest parts, and I recognize that there’s a certain strength that I have now, or a certain command that I have being one of the leads on the show that I hadn’t had before… Just owning that space and not being expected, as a woman, to shrink, or curtsy, or any of those sort of things.

Finally, though, the panelists moved on to the evening’s most important topic: what superhero they would most like to play. Maslany as Raphael from TMNT (“That Brooklyn accent…”), Williams as Spider-Man, and Beharie as the Hulk? I’m going to spend the next year imagining that movie.

(via HitFix and Entertainment Weekly, image via Jillie-Yo on Flickr)