It is a problem. Please fix it. 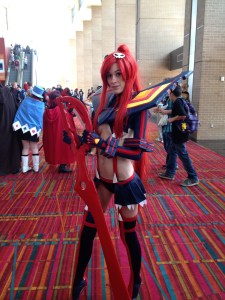 “Out of all respondents, 59 percent said they felt sexual harassment was a problem in comics and 25 percent said they had been sexually harassed in the industry. The harassment varied: while in the workplace or at work events, respondents were more likely to suffer disparaging comments about their gender, sexual orientation, or race. At conventions, respondents were more likely to be photographed against their wishes. Thirteen percent reported having unwanted comments of a sexual nature made about them at conventions—and eight percent of people of all genders reported they had been groped, assaulted, or raped at a comic convention.” —Convention harassment has been making waves again as SDCC approaches. Former The Mary Sue writer Janelle Asselin conducted a survey on the subject over social media earlier this year and published the results in an article at Bitch Magazine. They’re frightening, though not exactly surprising.

Asselin takes it a step farther and puts those percentages in direct correlation with the typical SDCC attendance number. Cosplay is one of the major factors in harassment because costumes for female characters are often perceived as “sexy.” Overall, it’s an astounding survey and really does a good job of showing just how big of a problem this is becoming. Be sure to check out the full article!