The amazing little show that could. 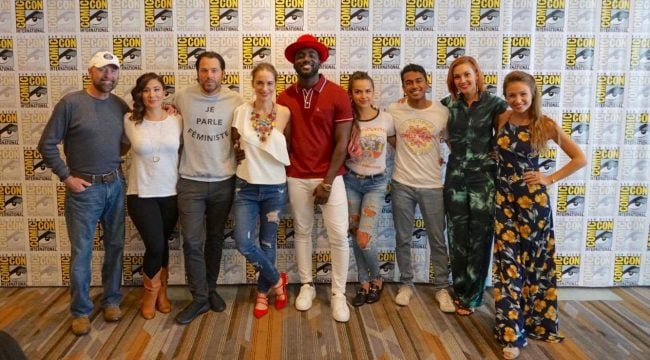 Wynonna Earp showed up to San Diego Comic-Con last weekend in a major way, with cast and creators taking the convention by storm to meet fans, discuss the show and announce the news of a season three (!) pick up to a packed panel crowd on Saturday afternoon. I got to chat with the cast as well as showrunner Emily Andras and Wynonna Earp comic creator Beau Smith about the latest twists in the story, the rest of the season and the amazing little show that could.

One thing was clear: the cast are the only people that love the show, Emily Andras, and Melanie Scrofano (Wynonna) more than the fans. Fans were recently shocked when in episode six of the currently airing second season, it was revealed that Wynonna was pregnant, a move that integrated Scrofano’s own real-life pregnancy. Praise for Scrofano as a performer and Andras’ boldness in unflinchingly building the pregnancy into the story was a constant theme among the performers. Beau Smith said it simply: “Emily is smart and Emily is also super brave.” It’s not just that she brought the pregnancy into the story, but also allowed Wynonna to keep kicking ass and to represent that not only as a woman but “also as a mother she can be strong.” The character of Wynonna was inspired by Smith’s own mother, and Smith sees her strength and fire in Scrofano’s performance.

Tim Rozon, who plays the suave and immortal Doc Holliday–who may or may not be the father of the Earplet–was similarly affected by Scrofano. “I was inspired and in awe of her daily,” Rozon said. “Selfishly, it was the best experience I’ve had in my life,” Rozon added, explaining how working with Scrofano and relating to her simply as a human being who was truly experiencing pregnancy made it “really easy to be dramatic and effective this year.” New cast addition this season, Tamara Duarte (Rosita) was personally moved by watching Scrofano, watching her working while pregnant and not slowing down, and to know this was something she herself could do.

No one had it harder than Scrofano, who not only filmed until four days before she gave birth but who also was co-writing a Wynonna Earp comic with Smith in her scant time off. “It was really hard emotionally,” Scrofano noted of the filming this season. However, according to Scrofano, the secrecy required to keep the pregnancy under wraps allowed the actors to return to the same “bubble” of filming the first season. Scrofano notes: “The work was pure. We were just coming at it fresh … We could just be a family and just focus.”

Andras was passionate while discussing the choice to write in Scrofano’s pregnancy. “You have to put your money where your mouth is, you just have to be prepared to honor that commitment if you’re a feminist,” Andras said. “I just can’t have her holding an increasingly large series of laundry baskets. I wanted her to kick some ass.” The show managed to catch Wynonna’s gestation up with Scrofano’s with a bit of magic, but that was also a conscious choice to wink that the “magical pregnancy” trope and also take the choice away from Wynonna. The option of termination and choice was important for the show to address (cue a bunch of sly ‘plan B’ jokes), but the removal of that choice from Wynonna also fit into the show’s themes. “Destiny keeps screwing over Wynonna,” Andras lamented.

Wynonna herself is feeling down, but not out as things move on this season. Putting it succinctly, Scrofano said Wynonna “can’t catch a fucking break.” Now as a mother, “I think she feels alone more than ever. I think she feels the burden of responsibility now in a way she’s never felt.” But that doesn’t mean things will slow down. As the season continues, things for Wynonna and the whole gang continue to amp up and evolve, and if the first half of the season has been wild, we can expect the second half to be, as Dominique Provost-Chalkley (Waverly Earp) described it “super epic.” Katherine Barrell (Nicole Haught) noted that things are getting “super high stakes, super dangerous.” Barrell added that with the addition of the Earp bun in the oven, “there’s this sense of when you’re caring for yourself and grownups it’s one thing, but when you’re caring an unborn child … it’s another.”

One thing we can look forward to is continued unexpected pairings of characters and seeing different sides of them. The entire cast lauded Andras for her ability to explore fresh aspects of her cast and continually keep them on their toes. For Shamier Anderson (Xavier Dolls) especially, we will see who Dolls is without Black Badge behind him. Since his relationship with Wynonna stalled thanks to the baby, “he’s just sad for a lot of things,” Anderson noted. But he did tease about Dolls’ dragon-like powers and that we will see more of “what he can actually do” when he goes “dragon mode.”

We may also learn more about the history between Dolls and newcomer Jeremy (Verrun Saranga). Saranga, who Beau Smith cited as a particular favorite this season, also praised Andras for the variety and challenges she brings for the character. “She always gives us different things to play,” Saranga said. Tamara Duarte teased similar revelations coming for our other new addition this season, saying of mysterious genius/bartender Rosita: “You’re gonna find out who she is, what she is … It’s gonna all unfold.” Provost-Chalkley as well has loved the new aspects of the younger (maybe-not-)Earp sister she’s been able to play this season. “[I’m] so fortunate that I’ve been given so much this year,” Provost-Chalkey said.

Speaking of Waverly, I asked how the fandom’s favorite ship, Wayhaught is going to weather the storm of stress this season. The answer? Nicole and Waverly are doing pretty well, considering everything. “They always come back together,” Provost-Chalkey said. Barrell added that, “It’s not very often that you get that many stressors on a new relationship, so I think it’s really showing the strength of their bond.” As for, well, everything else, the outlook isn’t so rosy. Andras teased cliffhanger endings for the rest of the season, as well as revelations about the Earp curse coming in this week’s episode. Beau Smith said of the rest of the season: “It’s about to go into hyper speed. There are characters that are going to come up that we are going to be shocked to see.” He also said an episode is coming that is “a kaleidoscope of chaos … and it will all come together. You’ll be very thankful or just plain shocked.”

No matter what, the fans are excited and the creators and cast are right there with them. “We won some sort of cosmic lottery for this show and fandom,” Rozon said. Lovers of strong feminist stories feel the same. “We have Game of Thrones‘ cut up vegetable budget,” Andras said, so “you really need character to be consistent and developed,” to make it seem just as epic. The show has succeeded spectacularly in that regard, and continues to get stronger with each episode. Andras gave a hat tip to SyFy for allowing her to keep the show so progressive: “They have never once said to me ‘tone it down with the vagina talk.’” Sometimes it takes a small show to do big things and trumpet a big message, and that’s what Wynonna Earp has done. “I think genre as a rule is really inclusive,” Andras noted. It’s a good thing too because it’s given us instantly iconic moments for female characters every week. Writing a feminist show is all Andras knows how to do, she explained: “It’s kinda my jam.” And it’s ours too.