Scrabble Will Officially Add a Word Based on Popular Opinion, What Could Go Wrong?

It better not be ew, Internet. 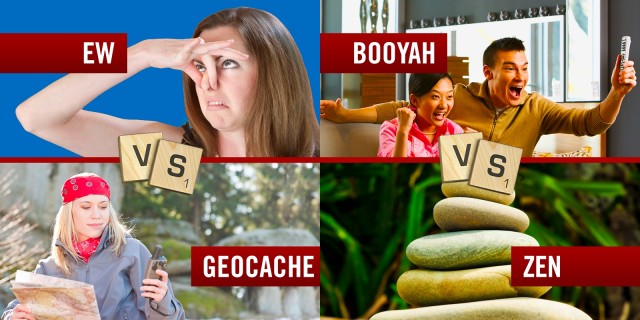 We’d all love to add words to the official Scrabble Dictionary—especially when you’re mid-game and frustrated that J-A-W-X-I-N-G-S isn’t a word because you’d get SO MANY POINTS! Hasbro’s been holding a bracket-style competition (because March), and they’re down to the final four. The winner will become an official word.

The final four (pictured above) are ew, booyah, geocache, and zen. You can vote for ew vs. geocache and booyah vs. zen on the Hasbro Game Night Facebook page today to decide which almost-words will go on to the final round for a chance at boardgame legitimacy tomorrow.

We wish we knew about this sooner, because geocache beat out cosplay yesterday, and we feel like we could have helped sway that vote. Not that we have anything against geocache—we’d certainly like to see it take down ew.