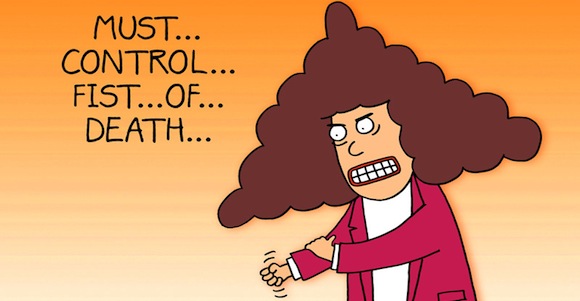 A few days ago, Scott Adams, creator of the long running comic strip Dilbert, asked the commenters on his blog for a topic to write about, and the overwhelming vote was for him to take up the cause of Men’s Rights Activism for a post.

I guess there are a lot of masculinists who also enjoy bland but occasionally funny cubicle farm humor? Never would have guessed. Well, let’s see how Adams handles the controversial topic:

The reality is that women are treated differently by society for exactly the same reason that children and the mentally handicapped are treated differently. It’s just easier this way for everyone. You don’t argue with a four-year old about why he shouldn’t eat candy for dinner. You don’t punch a mentally handicapped guy even if he punches you first. And you don’t argue when a women tells you she’s only making 80 cents to your dollar. It’s the path of least resistance. You save your energy for more important battles.

Adams has since taken down the post, but nothing ever actually gets taken off the internet, so you can read the whole thing here.

That’s essentially the gist of Adams’ argument: he agrees that yes, men are unfairly treated because our society has both not yet completely shed the notion of chivalry towards the fairer sex (“We take for granted that men should hold doors for women, and women should be served first in restaurants. Can you even imagine that situation in reverse?”), so, okay, we can agree that the same hierarchy that pins women to the role of needing protection pins men to a unnecessary role of being the protector. He also cites a great deal of other things as examples of “oppression” that we wouldn’t necessarily agree with. But guess what? Ultimately, he so totally doesn’t agree with Mens Rights Activists!

He thinks they should just suck it up and deal with all those crazy oppressive bitches. Because bitches always gonna be crazy, dog. And it’s the MANLY MAN’s job to take oppression like a MAN and stop bitching about it. Like the bitches do. And in conclusion:

I realize I might take some heat for lumping women, children and the mentally handicapped in the same group. So I want to be perfectly clear. I’m not saying women are similar to either group. I’m saying that a man’s best strategy for dealing with each group is disturbingly similar. If he’s smart, he takes the path of least resistance most of the time, which involves considering the emotional realities of other people. A man only digs in for a good fight on the few issues that matter to him, and for which he has some chance of winning. This is a strategy that men are uniquely suited for because, on average, we genuinely don’t care about 90% of what is happening around us.

So, on behalf of women, the mentally handicapped, and, last but definitely not least, men everywhere, thaaaaaanks Scott Adams. Thanks for proposing that the proper response to institutional irrationality could ever be to ignore it. And thanks for implying that the desire for equal pay for equal work is as irrational as a child wanting candy. Oh wait, you had an explanation for that, too:

Women earn only 80 cents on the dollar, on average, compared to what men earn for the same jobs. My readers will argue that if any two groups of people act differently, on average, one group is likely to get better results. On average, men negotiate pay differently and approach risk differently than women.

If we want to get paid equally, we should just be aggressive about it! Once we do that (I mean it’s not like it became law in 1963), and only once we do that, you can take the “path of least resistance” to Justicetown. How noble of you.

As if to dispel any doubt about his grasp of the situation, Adams responded in the comments of the Feministe post to let them know why he took the blog down (we were alerted by Kate Beaton):

That’s the reason the original blog was pulled down. All writing is designed for specific readers. This piece was designed for regular readers of The Scott Adams blog. That group has an unusually high reading comprehension level.

In this case, the content of the piece inspires so much emotion in some readers that they literally can’t understand it. The same would be true if the topic were about gun ownership or a dozen other topics. As emotion increases, reading comprehension decreases. This would be true of anyone, but regular readers of the Dilbert blog are pretty far along the bell curve toward rational thought, and relatively immune to emotional distortion.

Could be a troll? For our personal sanity lets hope it is.