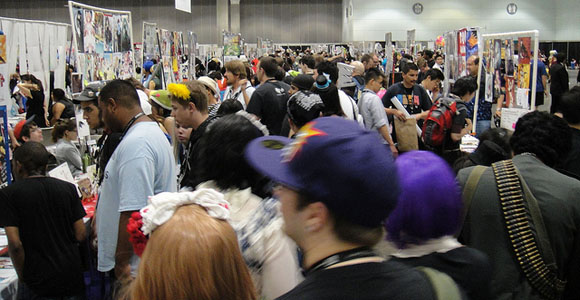 If you watch the comic book world as closely as I do, you might have noticed the wind changing direction. Specifically in the last week. Recent events have led to both men and women’s eyes being opened to a dark side of the community. These same events have also rallied many to do something about it. Find out how one creator speaking out about harassment has caused more than just a stir.

In the public’s mind, the story probably started in late October when creator Tess Fowler (Charmed, Grimm Fairy Tales) tweeted in support of Brandon Graham about supposed misogynistic behavior. In a series of tweets she wrote:

Everybody’s mad at @royalboiler for speaking truth. lol I wish MORE people in this industry would call out misogynistic men by name. @royalboiler called out a writer who tried to get me up to his room at SDCC one year by feigning interest in my pursuit of a comic career. The same guy who ran off my friends mid conversation to get to me, then left me with his room number and told me he’d be waiting to get to know me better. Then the next day when I walked by the booth with friends he shouted at me in front of crowds of pros and fans that he’d waited and waited for me and where the fuck did I go? Needless to say he was married with a pregnant wife at the time. I was young, naive and hopeful. But not THAT naive. Later we talked on Facebook and he made fun of my art, letting me know he had never had any interest in it to begin with. He was mad that I’d been afraid of him. At the time I liked to costume. He told me I should be thankful he was talking to me & that he’d overlooked me dressing up like an idiot. I look at his career and the way he’s touted as a feminist and I cringe. I am not the only woman who has had a run in with him either.

At the time, Fowler did not name the creator but did admit she stopped trying to attend conventions for a while because it was “too scary” for her. Though the story didn’t end there.

Rumblings started happening and eventually, Bleeding Cool posted the story with this statement from Fowler attached:

The behavior of the man in question is considered normal in this business. And the few people who know about it consider it to be my fault for “falling for it” when he feigned interest in my work. In my pursuit of doing this work professionally I ran a gauntlet of this sort of thing. I came in with stars in my eyes and were it not for the handful of really good people who stepped in to keep me safe, I might not have made it through without being completely jaded by it. I am older now, with young impressionable followers of my own. And I do my best to help them over these kinds of hurdles when they arise. I wish more people were brave enough to speak out. But for every voice raised in protest, there are a thousand to defend the person in question. It’s daunting.

And again, it didn’t end there. Fowler got into several discussions with others on Twitter who either did not believe her claim or found it somehow invalid. “Misogyny exists in comics. This was just a fraction of it. Sexism is something different, by definition. This wasn’t discrimination based on my sex. This was a power play for the purposes of cheating on his wife,” she wrote to one individual. “Granted, it was awhile ago, and maybe he’s a shining example of feminism now. But if the accounts I’ve heard are correct, he’s only gotten worse. What he did wasn’t sexism. He didn’t deny me a job or discriminate against me. He treated me like a plaything and let me know to my face just how little he thought of me as a person. Trust me. He’s a tried and true misogynist.”

Along the way, it seemed many industry folks knew who she was talking about, citing this not being an isolated incident, and Fowler received emails and other messages attesting to that which eventually made her decide to come forward with the name – Brian Wood.

Wood, the writer of the current all-female X-Men title from Marvel, the Star Wars ongoing from Dark Horse, and more.

Yesterday we posted a link to Heidi MacDonald’s piece on the whole situation at The Beat. She explained the situation but also called for all comics professionals to do more to stop these situations from happening. She noted that while Wood’s alleged behavior wasn’t illegal, it was something the community shouldn’t tolerate. She also said she reached out to Wood for comment and said, “he declined to comment.”

Today, Wood broke his silence and released the following statement on his official website:

For the last couple weeks I’ve been accused of a lot of very serious things. I feel I have to speak up for myself and for my friends and colleagues who are finding themselves under a sort of scrutiny they don’t deserve. This situation has reached the point where it is affecting people who in no way deserve it, up to and including my family.

Tess Fowler is correct about this: I did make a pass at her at SDCC Hyatt bar roughly 8 years ago.  But when she declined, that was the conclusion of the matter for me.  There was never a promise of quid pro quo, no exertion of power, no threats, and no revenge.  This was at a time in my career when I had very little professional power or industry recognition.  The pickup was a lame move, absolutely, and I’ll accept the heat for having done it, but that’s all it was: I liked her, I took a chance, and was shot down. I immediately regretted it, and I apologize to Ms. Fowler for the tackiness and embarrassment of it all.

I’ve kept quiet for these last couple weeks because this is a problematic thing to address without unintended blowback.  While I believe she is as incorrect as she can be about what my intent and motivations were, I don’t want to encourage any negative opinion directed back at her.

I think the larger issues of abuse in the comics industry are genuine and I share everyone’s concerns.  As a father to a young daughter showing an interest in making her own comics, I do really care about this stuff.  So I don’t want our difference of accounts to take attention away from that industry-wide discussion that needs to happen.

So are we at a he-said/she-said impasse? While Wood’s statement covers a lot of what’s happened, he fails to address something else Fowler has brought up. “Too many stories in my inbox about ONE man. This has to STOP,” she wrote. “Deep down I had hoped he’d turned over a new leaf. So many stories about him. Too many. Same tricks. Different years.”

It might also be important to note just after Wood tweeted his statement he wrote, “Heidi reporting on The Beat that I had give her a ‘no comment’ quote was false, never gave that to her.”

We reached out to hear what MacDonald had to say about Wood’s tweet. She told us, “I reached out to Brian Wood for comment, as I did not feel comfortable only reporting one side of the story, and he did not comment.”

So where does this leave us? We reached out to Marvel who had no official comment on the matter but many fans have been turned off of Wood’s work thanks to the allegations, while others think too much was made out of nothing now that Wood has shared his thoughts on how everything went down.

Whether the allegations are true, it is certainly possible Fowler could come forward with more details contradicting Wood’s statement, is only one aspect of a larger issue. We’ve had to write about harassment in the geek community way too many times this year but it’s important to remember, it’s not just fans doing the harassing, it’s sometimes professionals in the industry. Is this the incident that will finally turn the tide? Or at the very least, make even more people aware this is a serious issue that needs to be dealt with?

[UPDATE] Fowler has put together a tumblr post describing her experience in greater detail. You can read that here.