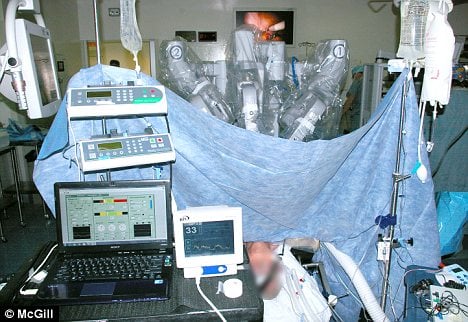 The da Vinci robot surgeon, a robot anesthesiologist hilariously named McSleepy, and a team of surgeons at McGill University performed an all-robot surgery, which happened to be a prostate surgery. The procedure is being billed as the “first successful all-robot surgery,” except the robots doing the dosing and slicing were actually being controlled by humans.

The robots were controlled from behind the scenes using 3D HD images transmitted to the surgeons, while the surgeons used the mechanical (some might say deadly) precision of the robots to more cleanly perform the prostate surgery.

So, the “first all-robot surgery” isn’t as scary as it sounds, in that instead of a sentient robot learning how to efficiently cut up our insides, the robots were basically just an extension of the human surgeons controlling it from behind what was presumably a big The Wizard of Oz style curtain.