How to Make a Transparent Mouse Embryo Using Pee 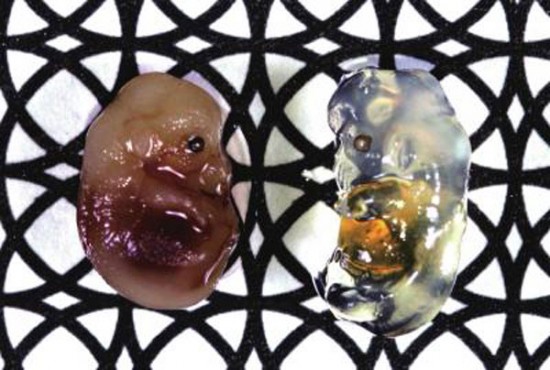 Have you ever been taking a picture of your mouse embryo collection and gotten frustrated because the darn things just weren’t transparent enough? Like a lot of other bizarrely specific issues, scientists have actually had this one before. In order to solve it, scientists at RIKEN in Japan have published a special “recipe” that will let you transpar-ify all of your mouse embryos in two weeks or less!

They accomplish this effect by soaking the embryos in something called Scale (italics are theirs) for around two weeks, the main ingredients of which are urea (yes, that stuff from urine), Triton-X, which is a kind of flesh-softening detergent, and Glycerol from antifreeze. That’s it. There are already similar products on the market called clearing agents, but this one takes the cake in terms of effectiveness. While others can help you only see so deep, with Scale, the only limitation is the strength of your microscope.

The hope is that this chemical cocktail can be used to make brain matter transparent, greatly aiding in the task of tracing and mapping brain connections. Tracing brain connections is, in fact, such complicated, nuanced work that it is often still done by hand. The purpose of these transparency solutions and the pictures that can result are to aid brain mappers by providing them with better and better pictures of neurons so that their maps can be more accurate.

For the time being Scale is mostly being used to study brain tissue, but the solution should provide the same effect on other kinds of tissue as well. Scale is pretty powerful stuff so, at the moment, it’s only being used on dead tissue. The hope is that, eventually, a milder variety will be produced that can actually be used on living creatures. I’m not sure I would want to be one of those creatures, but man, I would love to see one.