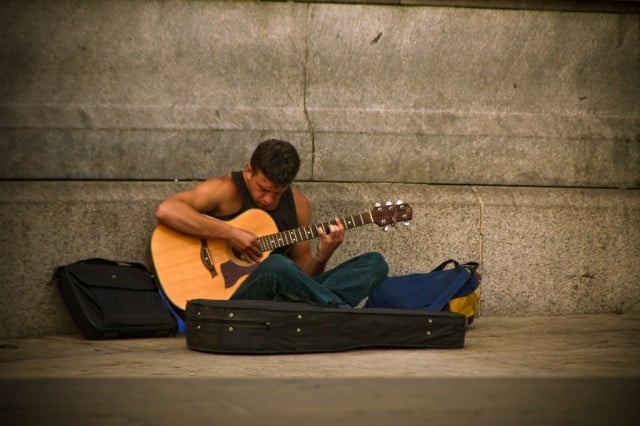 I think it’s safe to work from the assumption that any guy who has ever picked up a guitar did so for one reason and one reason only — because he heard that chicks are into guys who play guitar. According to a French study, that piece of folk wisdom may have a kernel of truth to it, as a series of social experiments suggest that women find a man more attractive when he is holding a guitar.

To test whether or not just holding a guitar made a man more attractive to the fairer sex, researchers from the Université de Bretagne-Sud in France chose a “good looking” male subject for a social experiment in picking up chicks. The man approached a total of 300 women on the street, asking for their number each time. For one round of 100, he was carrying nothing, in another round of 100, he was carrying a guitar, and in the third, he was burdened with a gym bag. The results speak for themselves — while the subject scored digits from nine ladies while holding a gym bag and 14 while strolling around empty-handed, approaching women while holding a guitar helped him land 31 out of 100 numbers.

Now, sure, that’s a hilariously small sample size and a less-than-watertight experimental setup, but the results are pretty interesting. Dude was over twice as effective at getting phone numbers from women with a guitar than without it. While a guitar is clearly by no means Spanish Fly — after all, succeeding in getting a number 31 times out of 100 means getting shot down 69 times — it looks like an improvement of the odds at least. And let’s not sneeze at a 31% success rate — after all, a .310 batting average is a Hall of Fame line however you slice it.

A related study by Israeli researchers setup two dummy Facebook pages for the same charming test subject, one with a profile picture of him empty-handed, the other with — you guessed it — a picture of him holding a guitar. They then sent out friend requests to 50 single females from the accounts, with almost three times as many women responding to requests from the profile of the man holding the guitar.

Again, these are hardly concrete studies, and researchers reporting on their work this week in Letters on Evolutionary Behavioral Science don’t have much of an idea as to why women would find men with guitars more attractive. They suspect that holding a musical instrument may indicate higher levels of intellectual ability and physical fitness in potential mates, though that wouldn’t explain why the results of a Facebook experiment that  used an attractive female subject failed to show any change in her attractiveness to men whether or not she was holding a guitar.

For our part, we anxiously await the follow up study from this research team investigating how one’s attractiveness plummets once they start playing an acoustic guitar in the living room at a crowded party, because man, that guy, right?