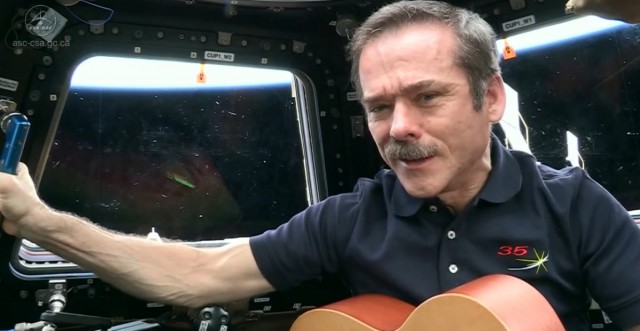 For most of the world, today is just another stinking Monday, but in Canada it’s Music Monday — a day to help the Coalition for Music Education celebrate music education in schools. To do that, they’re having rock star astronaut Chris Hadfield perform with an expected 600,000 Canadian children live from space at 12 PM EDT. You can watch the live stream and sing along right here, even if you are not Canadian or a child. Go ahead, we won’t tell.

Hadfield tweeted out an invitation to Canada and the world to join him in singing his song “ISS (Is Somebody Singing?)” It’s the same song he performed with The Barenaked Ladies and a children’s choir back in February.

There are over 600,000 students all singing together live with me tomorrow – amazing!youtu.be/lTOaXrwatmI@musicmakesus_ca

600,000 is an awful lot of Canadian children, and it’s obviously going to be a great moment of national pride for Canada, but everyone around the world is welcome to join in. You don’t have to be Canadian to be moved by more than half a million singing children being led by a man and his guitar in space. It’s like a Raffi concert, if Raffi concerts took place in orbit and were awesome.

The live stream below will get going in earnest at noon. Until then, you can practice the lyrics and warm up your voice by listening to Hadfield perform “ISS” with the Barenaked Ladies.

UPDATE: They’ve switched the feed from the page, and we can’t seem to embed the new one. Here’s a link to the webcast http://www.asc-csa.gc.ca/eng/webcast.asp

The above Ustream link should have a replay of the performance at 12:30 PM EDT