Why the Frak Don’t People Say “Fuck” on Cable? It’s All About the Money 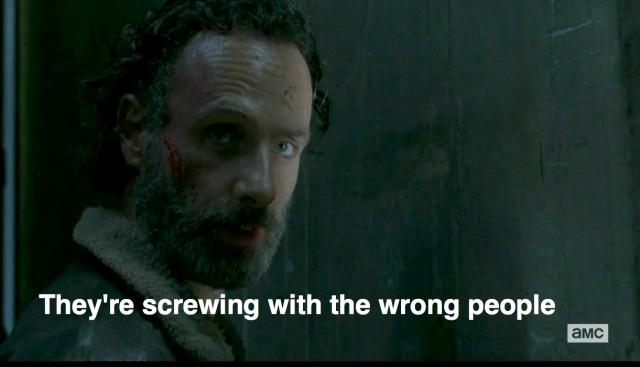 With the exception of premium channels like HBO, people don’t say the word “fuck” on television. It’s either bleeped out or replaced with another word. But why? Many people assume it’s because of FCC regulation, but the FCC only controls over-the-air broadcasts. Shows on cable can say whatever they want. So what fucking gives?

I started thinking about this last night when, during The Walking Dead finale, my Twitter-friend Emily Hughes expressed some concern over the last line of the episode:

Kills me that they can’t say “fuck” on AMC. I laughed out loud at “screwing” in that Big Dramatic last line. #WalkingDead

The line was, “They’re screwing with the wrong people.”

What’s laughable about it without giving anything away is that, under the circumstances that line is delivered, any reasonable person would have said, “They’re fucking with the wrong people.” Well, probably not those words exactly, because it’s a bad line, but they wouldn’t have said “screwing.”

Cable channels don’t have to answer to the FCC, but that doesn’t mean they don’t have anyone to answer to. Channels make money by selling shows to advertisers, and that’s easier if the show is “family friendly,” because more people watch it. The reason HBO, Cinemax, and other premium channels can do whatever they want is because they’re not selling their shows to advertisers.

Channels also have cable providers to answer to. Based on content, a provider may put a channel in a more expensive tier of programming or choose not to carry the channel. That means fewer people will have access to the shows, making those shows are harder to sell to advertisers. According to the rules on the FCC site under the heading Program Content Regulations, it seems that cable providers may have to answer to the FCC in certain circumstances:

Other words like “shit” and “ass” have crept their way into cable in recent years, often with some restrictions like only being used in certain contexts or after a particular time of day. These are put in place by each channel’s own Standards & Practices department—the people who decide what can be said or done on a show.

So it’s not that they can’t say “fuck” on The Walking Dead and other cable shows. It’s that they choose not to so they appeal to a wider audience. But come on AMC, no one is going to take, “They’re screwing with the wrong people,” seriously.

(via FCC.gov, image via The Walking Dead)