Mirror, Mirror: Two of Saturn’s Moons Face Off Across Its Rings 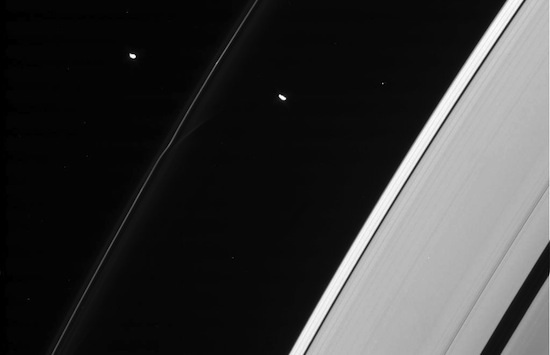 While the above picture may look like an asteroid as seen in an enormous cosmic mirror, it’s not — it’s much, much cooler than that. This is the one of the latest images from NASA’s Cassini probe, which shows two of Saturns “shepherd moons” — Pandora and Prometheus, and we swear we’re not making that up — seemingly staring at one another down across the planet’s rings.

These shepherd moons of Saturn aren’t like normal satellites — much smaller than traditional moons, they orbit within Saturn’s ring system, sculpting and shaping the rings that have made Saturn famous. On their paths around the planet, Prometheus and Pandora carve the gaps that give the rings their striped look, and also keep the edges of the rings sharp looking, providing their contrast. It’s just one of the latest really amazing images from the Cassini probe, and an unexpected look at the satellites responsible for the planet’s most notable feature.