Sarah Silverman Addresses Louis C.K.: “I Love Louis. But Louis Did These Things” 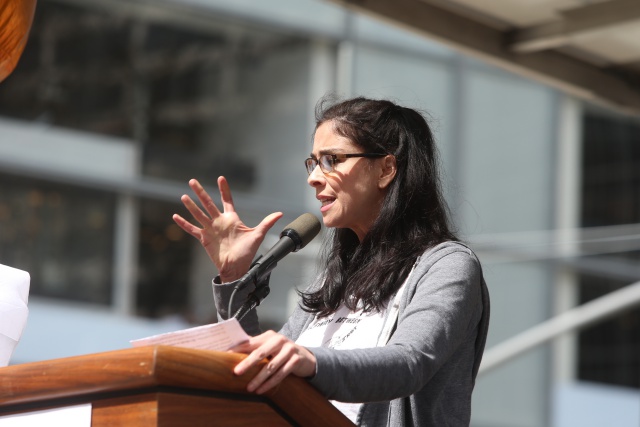 As much as we know that celebrities are only human beings, we sometimes look up to them. We’re glad when they share the values we do and often find escapism or find something to relate to in the work they produce. Despite our better judgment, we turn people into heroes, and so when they fall, it hurts. I was never a huge fan of Louis C.K., but I knew of his work (I even almost puked in front of him at my old job). He was a part of the liberal comedian down-with-it white guy group that I frequently side-eyed, but could still appreciate from time to time. So when the New York Times article dropped and confirmed rumors that had been going on about C.K. for years, I wasn’t hurt, but I knew people who were.

Sarah Silverman has been messy at times (I will never ever handwave that blackface skit, sorry guys), but in her Hulu show, I Love You, America, she used her most recent episode to talk about sexual harassment and Louis C.K. The whole video is embedded below, and the entire speech is well done. Silverman is honest about her enduring love for C.K. as someone she’s known for over two decades but also recognizes that he fucked up and therefore is reaping what he sowed.

And it sucks, and some of our heroes will be taken down, and we will discover bad things about people we like, or in some cases, people we love. Let’s just say it. I’m talking about Louis. And I’ve of course been asked to comment, and in full honesty, I really, really, really don’t want to. I wish I could sit this one out. But then I remembered something I said on this very show, that if it’s mentionable, it’s manageable. So I’m going to address the elephant masturbating in the room. And full disclosure: I’m still processing all this shit. But here’s where I’m at on it as of this moment. It could change tomorrow, and if it does, I will keep you posted.

One of my best friends of over 25 years, Louis C. K., masturbated in front of women. He wielded his power with women in fucked-up ways, sometimes to the point where they left comedy entirely. I could couch this with heartwarming stories of our friendship and what a great dad he is — but that’s totally irrelevant, isn’t it? Yes, it is.

This was much better than the useless comments of Bryan Cranston, asking for compassion for these men. Silverman knows C.K., and while she loves and has compassion for him, she will not be asking anyone else to share in that compassion. One of the reasons this culture perpetuates is because people refuse to believe that someone they love could be that guy. C.K. was that guy and Silverman, along with the rest of the people who have stood by him for years, are now going to have to decide whether to speak up or stay silent.

(via The Hollywood Reporter, image: a katz/Shutterstock.com)